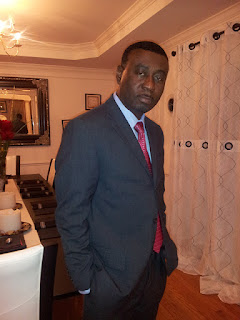 A United States- based Nigerian consultant expert and strategic advisor, has declared his intention to run for the Presidency in the 2019 general elections, even as he described current leaders of the country as “brain dead ” and unfit to lead Nigeria in the 21st Century.
Okey Samuel Mbonu, made his intentions known during a world press conference in Abuja at the weekend, stressing that he is motivated by a desperate need to rescue the nation from the seeming eternal abyss into which past and present leaders have plunged the potentially rich country.
Although he paid tribute to some past leaders for their struggle to gain independence for Nigeria, he argued that the time has come for a new thinking, new ideas and brand new leadership that will extricate Nigeria from underdevelopment and  turn the potentials or the nation into actual wealth.
” It is now time for a brand new leadership, the kind of leadership suitable for the 21st Century. You are looking at that 21st Century Nigerian leader with global credentials, international connection and untainted career in a vigorous environment with no enemies in Nigeria – that is me,” he said.
He said ” the people leading Nigeria now lack ideas and cannot give what they don’t have. They are brain dead because they rely on crude oil which is a passing phenomenon. Countries like China in the next 20 years will phase out crude oil as they are going into renewable energy to power their vehicles. So we must stop thinking about crude oil. There is a lot of biofuel resources now that will make crude oil obsolete and we need to be prepared for it, ” he warned.
He disclosed that his policy framework is anchored on  research done on five critical areas of the  Nigerian economy, which include; security,  electricity and related infrastructure, health care, youth and girl education and the political will to govern the country on the basis of equality and competence. He added he will focus more on intellectual property to grow the Nigerian economy.
On security, the former Commissioner for Housing Development in Maryland, US, noted that he will improve the welfare of all the security agencies and work with traditional institutions to improve security especially now that there is no state police. He also advised that ranching remains the best solution for the incessant clashes between herdsmen and farmers, which have led to the death of thousands and the displacement of many more.
He explained that the solutions to the crisis of policy in the country will emerge under his leadership adding that he has the international connection and experience that can bring massive investment in the electricity sector. He noted that if he becomes President, he will put the power sector under the presidency because of its strategic importance to the Nigerian economy.
He  said he will revamp education and align it with individual talents and passion adding that he will introduce a robust health policy that will enable Nigerians to process quality health care  at affordable price.
Mbonu blamed the Nigerian government for neglecting the youth, who he said are highly creative and hardworking, despite the challenges confronting them.
He promised to increase the creative capacity of the vibrant Nigerian entertainment industry and make it a major source of export to all parts of the world.
“Nigeria is the world capital of rhythm, that is music and the way it flows and produced. People travel from all over the world to learn music rhythm in Nigeria. Under my leadership, we will dominate performance world wide, we will be the world’s biggest exporters of performance art,” he said.
On the political platform under which he will run for office, Mbonu said he is consulting with parties that will align with his interest, which is to uplift Nigeria even as he admonished Nigerians to avoid zoning, which he said breeds mediocrity. He also urged citizens go get their Permanent Voters Card (PVCs) and vote wisely.