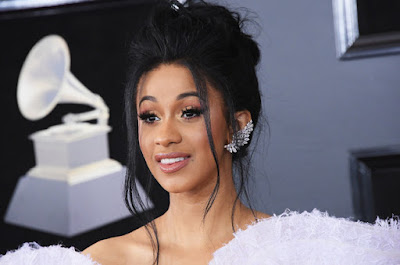 The feud between Cardi B and Azealia Banks has reignited -- and it's getting pretty messy.
During a visit to The Breakfast Club on Friday (May 11), the always outspoken Banks threw out some major insults about Cardi, calling her everything from an “illiterate, untalented rat” to a "caricature of a black woman."
“Two years ago, the conversation surrounding black women’s culture was really reaching an all-time high,” Banks told the radio show's hosts, referencing Beyonce's 2016 album, Lemonade. “There was just this really, really, really intelligent conversation going on nationally and then everything just kind of changed and then it was like Cardi B.”

Banks continued, “I’m just talking about this caricature of a black woman that black women themselves would never be able to get away with. Like, if my spelling and grammar was that bad, I’d be canceled. If Nicki Minaj spelled like that, we would be ragging on her all day.”

Cardi B quickly responded to Banks' offensive comments on Instagram -- in both a post of her own, and the comments of another featuring video of the conversation in question. Shortly after, the Invasion of Privacy rapper deleted her entire IG account.
"I'm from the hood. I speak how I speak I am how I am. I did not choose to be famous people choose me! People followed me on Instagram and the people gave me a platform to introduce my talent,” Cardi wrote. “I never asked to be a example or a role model I don't want to change my ways because I'm famous that's why I just mind my business. This is coming from a woman that bleached her skin but want to advocate. GOODBYE. Im not apologizing or kill myself because of who I am.”

Read Cardi B's now-deleted IG statement in the screen grab below.
This isn't the first time Cardi and Banks have battled it out online. In September, Banks called Cardi a "poor man's Nicki Minaj," and accused her of using a ghostwriter for her hit song "Bodak Yellow." In response, Cardi posted a video of Banks dancing to "Bodak Yellow" in a club.