Nigerian Pastor Arrested in Liberia for US$250,000 counterfeits 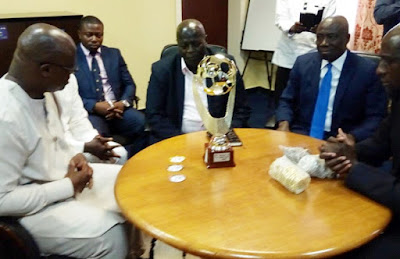 Police authorities in Monrovia say they have arrested a Nigerian Pastor, named Amos John Iledare of the Testimony Church of God off the Robertsfield Highway for allegedly dumping US$250,000 counterfeit money on the Liberian market. Pastor Iledare was arrested along with two forest bureaus operators.
Police Inspector General Col. Patrick Sudue told local journalists Monday May 29 that the amount was dumped on the Liberian market in February, this year allegedly by Pastor Iledare who apparently doubles as a businessman.
Col. Sudue said out of the total US$250,000, police have been able to confiscate only US$12,700, leaving the rest which appear 90% real in circulation. “Ladies and gentlemen of the press, if I display this money to you, you will not believe it. There’s no distinction from that of the actual United States banknotes. Texture is almost the same, the money is like almost 90 percent real,” says Col. Sudue.
He says the images on the counterfeit and the actual US dollars are the same, and the counterfeit only has a little bit of roughness in testure.“Ladies and gentlemen of the press, I think you can see some of the reasons why our rate keeps climbing, because we have people on the market duping other people, using these counterfeit banknotes and extracting the dollars from the market. And this is seriously depreciating our Liberian dollars currency,” Col. Sudue adds.

Col. Sude recalls that on 25 May, Police got a tip - off concerning an alleged counterfeit incident around the King Gray Community. They swiftly moved in and arrested John Gbatu with US$300.00 counterfeit.
During investigation, he says suspect Gbatu admitted that his friend’s father was the one in possession of these counterfeit banknotes.According to Col. Sudue, suspect Gbatu narrated that a money exchanger who is jointly being held for the same case, had told him that the money was actually a counterfeit, but could still be used because its appearance looked very real.
He said the money exchanger gave him one hundred and twenty five dollars for one of the fifty dollars banknotes, following which he (Gbatu) took a thousand dollars counterfeit there the next day for US$10.00.
His alleged revelation to police led to the arrest of the money exchanger amidst concern that he may have been taking the counterfeit from Gbatu to be duping other people too in the process of exchanging money.
The police chief said during his arrest in Dwarzon, Pastor Iledare tried to deny, but they discovered during further check that the accused was engaged in anti - breeze or black money scam, alarming that it is a serious problem.
At the press conference Monday, Col. Sudue displayed huge sum of counterfeit US Dollars, saying “the money is like 90 percent real.”Col. Sudue pleads with the public, the banking sector and all involve in money transactions to take keen note at the US dollars that will be presented to them so as to avoid being duped.
He warns that the public has to be careful with money given them in the streets, because a huge quantity of Liberian dollars counterfeits was also confiscated recently.
He promises that the police will do everything possible to get to the source of those people that are bringing such counterfeits on the Liberian market “that [are] destroying our economy.”
Col. Sudue says it is really detrimental to the economy here, vowing that his administration at the Liberia National Police (LNP) will do everything within its power to fight both economic crimes and any other crime that will occur within the borders here.
The police chief observes that some of the counterfeits come in very huge trucks that are difficult to offload at the border, but adds that he is contemplating on meeting the Liberia Revenue Authority Boss so that officers are assigned to do inspections on most of these trucks that will be coming in.
According to him, a save containing the US counterfeits in question was impounded by police from the Nigerian Pastor Iledare’s place in Dwarzon, Margibi County.
Col. Sudue says people are duped with black money first by being given a minimum of the real banknotes and then later request to produce huge sum of their local currency in exchange of additional foreign money in counterfeit, like the US dollars that is of high demand here.
Interviewed by journalists, the accused Nigerian Pastor Iledare admits that he was keeping the counterfeits in his house, but he claims that he was not using it anymore because he is now a changed man.
Quizzed why he didn’t report it to the police, he answers: “That is the mistake that I made.” He blames himself and the man that allegedly took it from his house.
He says he was in the counterfeit business about six years ago, but he kept the counterfeits on top of his ceiling, saying he didn’t know how this guy got into his house and stole it.
In another development, police chief Sudue says on 24 May, an armed robbery incident occurred in the King Gray Community where an insider working for a Chinese national led other suspects to break into the victim’s premises and stole some items including a safe.
Three suspects arrested in relation to the armed robbery incident include Richard W. Boandolo, Jackson Joe and Junior Kollie, and they are due to face armed robbery charges, according to Col. Sudue.
Col. Sudue says the Chinese national reports that he had some cash, passport and other important documents in the stolen safe.
The safe is yet to be opened because only the Chinese victim knows the code.
By Winston W. Parley-Edited by Othello B. Garblah