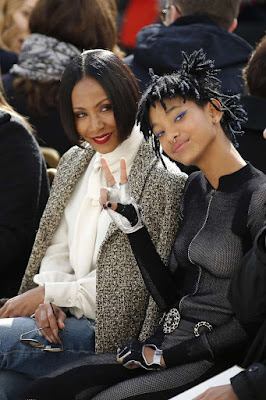 ﻿
Willow Smith dropped a bombshell during a guest appearance on her mom's "Red Table Talks": The teen was cutting her herself following the success of her 2010 song "Whip My Hair."
The 17-year-old's mom, Jada Pinkett Smith, was flabbergasted by the admission.
While on the Facebook talk show, Willow said she lost her "sanity" after the song hit it big.
"It was after that whole 'Whip My Hair' thing and and I had just stopped doing singing lessons and I was kind of just in this gray area of, 'Who am I? Do I have a purpose? Is there anything I can do besides this?'" she said. "After the tour, the promotion and all that, they wanted me to finish my album and I was like, I'm not going to do that."
"After all of that kinda settled down and it was like a kind of lull, I was just listening to a lot of dark music," she continued. "It was just so crazy and I was plunged into this black hole, and I was cutting myself."
A shocked Jada said, "What? Really? I didn't see that part. Cutting myself where?"
Her daughter said, "On my wrist. You can't see it. I totally lost my sanity there."
Only one of Willow's friends really how dark her mental state was.
"I never talk about it because it was such a short, weird point in my life," she said. "I honestly felt like I was experiencing so much emotional pain, but my physical circumstances weren't reflecting that. One night I was like, this is actually psychotic and after that I just stopped."
Jada, almost at a loss for words, said, "That's good to freakin' know, Willow, I had no idea," said Jada. "I never saw any signs of that."
﻿