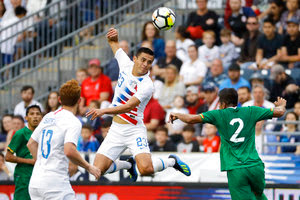 Josh Sargent scored in his American debut, fellow 18-year-old Tim Weah added a goal in his second international match and a young United States team beat Bolivia 3-0 in an exhibition Monday night.
Walker Zimmerman put the Americans ahead in the 37th minute and Sargent doubled the lead in the 52nd. Weah, the son of former FIFA Player of the Year and current Liberia president George Weah, scored in the 59th.
Weah, born on Feb. 22, 2000, became the fourth-youngest American to score when he displaced Sargent, who was born two days earlier. Sargent’s goal was particularly memorable — with his back to the goal, he intercepted a pass over his head from the goalkeeper, played the ball to himself and put it in the net with a strong right-footed shot from about 11 yards.
With no World Cup to play for, interim U.S. coach Dave Sarachan went with youth. He gave six players their debuts, raising the total to 15 in four matches since the Americans were eliminated in qualifying. Defenders Erik Palmer-Brown and Antonee Robinson and goalkeeper Alex Bono joined Sargent as debutants in the starting lineup, and defender Matt Olosune and midfielder Keatan Parks entered on the second half.
Christian Pulisic, the 19-year-old American star from nearby Hershey, looked heavy-legged at the end of a long club season as he played his first international match since the loss at Trinidad and Tobago last October that ended the Americans’ streak of World Cup appearances at seven.
Zimmerman, making his third international appearance, scored with a header off a corner kick from Joe Corona, outjumping defender Ronald Raldes.
Sargent, easily spotted because of his bright red hair, robbed Carlos Lampe when the goalkeeper was returning a pass to defender Luis Haquin.
Sargent scored four goals at last year’s Under-20 World Cup and three at the Under-17 World Cup, where Weah was a teammate. Sargent had not played a competitive match since the U-17 tournament in October. He signed with Werder Bremen in February, after the international transfer window closed, and is ineligible until next season.
Weah made his debut for Paris Saint-Germain in March and got his first club start in the final match of the season this month. He made his U.S. debut as a second-half substitute in a March exhibition against Paraguay and scored against Bolivia with a right-footed flick from about 4 yards off Weston McKinnie’s cross.