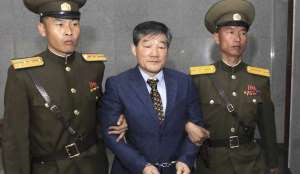 "We got Kim Jong Un impressed enough to be releasing three prisoners today," Giuliani, a member of President Donald Trump's legal team, said on "Fox & Friends."
As of late Wednesday night, US officials did not have confirmation that the men had been released from North Korean detention camps. An official with knowledge of the ongoing negotiations told CNN on Wednesday that their release was "imminent."
White House press secretary Sarah Sanders, however, said later Thursday she didn't have an official statement about the potential release, only saying that "we think that that would be an incredible sign of goodwill, and certainly a great statement for the North Koreans to make ahead of the summit and the discussions."


She declined to answer a question about why Giuliani made the announcement as opposed to the White House. The National Security Council also declined to comment on why Giuliani, who is not a White House employee, was making announcements like this during a cable news interview.
Trump teased the prisoners' impending release on Wednesday night, tweeting "stay tuned," and said the Obama administration had been unsuccessful in trying to free the "three hostages." Two of the three Americans, however, were imprisoned during Trump's presidency.
The three Americans — Kim Dong Chul, Kim Hak-song and Kim Sang Duk, also known as Tony Kim — have been detained in North Korea for months. Kim Dong Chul has been in North Korean custody since before Trump was elected, and the other two detainees were arrested last spring, after Trump's inauguration and as tensions between Washington and Pyongyang were beginning to ramp up.
Tony Kim and Kim Hak-song, who were arrested in April and May of 2017 respectively, were both accused of carrying out "hostile acts" against the Kim regime. Both worked at the Pyongyang University of Science and Technology (PUST), which bills itself as the only privately run university in the North Korean capital.
Kim Dong Chul was arrested in 2015 for spying on behalf of South Korea, he told CNN in January 2016. The interview was conducted in the presence of North Korean officials, so CNN could not determine whether Kim's comments were made under duress.
CNN's Kaitlan Collins and Kevin Liptak contributed to this report.