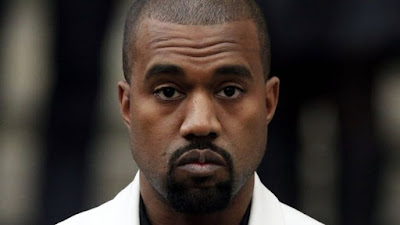 US rapper Kanye West has said the enslavement of African Americans over centuries may have been a "choice".
"When you hear about slavery for 400 years ... for 400 years? That sounds like a choice," he said during an appearance on entertainment site TMZ.
"We're mentally imprisoned," the star added. He recently made headlines for his support for President Trump.
Black people were forcibly brought from Africa to the US during the 17th, 18th and 19th centuries and sold as slaves.

West later tweeted that his comments on Tuesday had been misinterpreted and that he "brought up the 400 years point because we can't be mentally imprisoned for another 400 years".

To the interviewers at TMZ, West said that "right now we're choosing to be enslaved", which provoked an angry response from a black member of staff at the company, Van Lathan.
Mr Lathan said the rapper's comments appeared to be made with "the absence of thought".

"You're entitled to believe whatever you want, but there is fact and real-world, real-life consequence behind everything that you just said," he added as the star stood still stroking his chin.
"We have to deal with the marginalisation that has come from the 400 years of slavery that you said for our people was a choice," Mr Lathan continued, adding: "I'm appalled, and brother I am unbelievably hurt by the fact that you have morphed into something to me that isn't real."
In the TMZ footage, West refers to Mr Trump as "my boy" and says that the president is "one of rap's favourite people".
His comments sparked a backlash on social media with some Twitter users suggesting the rapper should revisit the history books.
It comes just days after West released a song defending his support for Mr Trump, who he has insisted is "fighting for the people".
The controversial track, Ye vs The People, caused a stir among rappers, including Snoop Dogg, who appeared offended by its lyrical content.
"Like a gang truce, the first Blood to shake the Crip's hand," West raps, referring to a peace agreement between two notorious Los Angeles street gangs.
West has courted controversy with his support for Mr Trump and conservative commentators like Scott Adams and Candace Owens, who has spoken out against the Black Lives Matter movement.