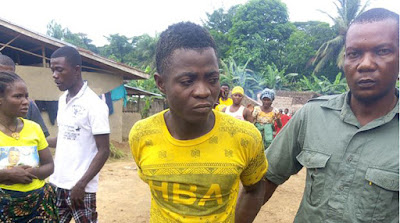 Buchanan, Grand Bassa County – A 30-year-old man identified as Alphanso Smith was on Monday, April 30, arrested by the Liberian National police for allegedly severely injuring his 23-year-old wife and murdering her twin toddlers.
The tragedy occurred in Kankpelleh’s Town, District One, Grand Bassa County on early Sunday morning.
Eyewitnesses told FrontPage Africa that Smith wounded his wife, who had given birth to a set of twin few weeks ago, on her neck and arm during a fist fight.
He later killed the two children who were named Wonder and Chinca Smith.
It is not yet clear as to what led to his action, but residents said that they heard sounds of tussle coming from their room.
The noise appeared to be a scuffle out of sexual harassment, they said.

A closed neighbor of the deceased told FrontPageAfrica that Alphanso had been in the constant habit of trying to have sexual affair with his wife Hannah who had given birth just few weeks ago.
Hannah is currently undergoing treatment at a nearby hospital in the district, while the suspect is being detained at the Liberian National Police Grand Bassa detachment as investigation into the matter continues.
This is the second major incident of violence against women since April this year in the county.
An 80-year-old man identified as James T. Dweh was also arrested for allegedly killing his 60 year-old wife in the Wayzohn Community at about 8PM on Friday, April 27, 2018.
Community members said old man Dweh and his wife Cecelia were arguing and they later heard her shouting.
Barrie Kamara, a neighbor, said he heard her calling for help when she was being chocked by the suspect.
“I was walking and I heard from their room ‘you chocking me!’ and later there was no more sound from the room,” he said.
Report by Elton W. Tiah, FPA Contributor