30 journalists on trial over failed coup in Turkey 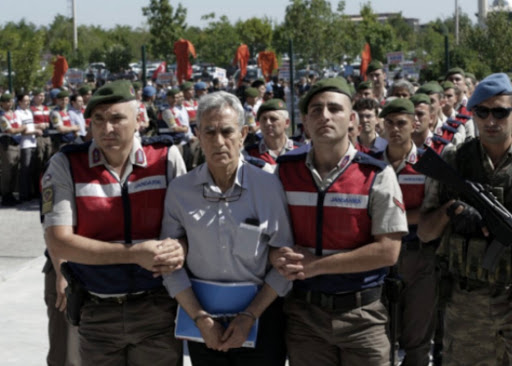 30 journalists and newspaper executives from a Turkish newspaper which was shut down in 2016 went on trial facing life sentences over charges that they had links to a failed coup attempt.

The former employees of Zaman Newspaper are charged with “membership of an armed terror organisation” and “attempting to overthrow” the government, parliament and the constitutional order through their links to cleric Fethullah Gulen.

Zaman was affiliated with Gulen, a U.S.-based cleric and former ally of President Tayyip Erdogan who blames Gulen for instigating the failed July 2016 coup.

Zaman was first seized by the Turkish government in March 2016, months before the coup attempt, and then closed down by a government decree. Twenty-two of the suspects have been in pre-trial detention for months, including 73-year-old columnist Sahin Alpay.

Turkey’s Justice Ministry announced in July that more than 50,000 people had been arrested and 169,013 have been the subject of legal proceedings since the coup attempt. The scale of the crackdown has drawn criticism from Turkey’s Western allies and led German Chancellor Angela Merkel to call for Ankara’s EU accession talks to be called off.