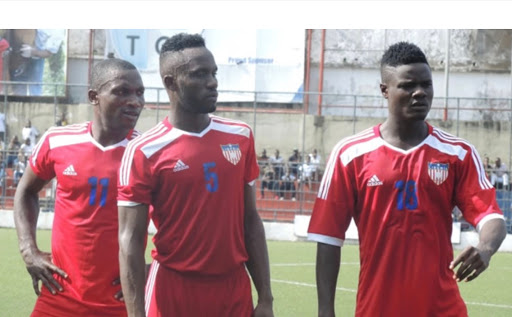 Liberia local based national football team is expected to depart the country Thursday, September 7, 2017 for the inaugural edition of the tournament in Ghana Sponsored by Fox Sports.

According to the Liberia Football Association, the Lone Star’s delegation for the tournament is made up of 18 players and seven officials.

They will face the Teranga Lions of Senegal in their first match on Sunday, September 10 in Cape Coast, Ghana.

Liberia must defeat Senegal to move forward in the tournament.

The first rounds will be played on a knockout basis.

Speaking to FrontPageAfrica at the team’s training ground on Wednesday, head coach James Debbah frowned at the level of preparation of his team terming it as poor.

Debbah said the three weeks of training is not sufficient for the national team, but said he is hopeful of upsetting their opponent Senegal.

He added that he recommended to the LFA to camp the team before their departure but the old age problem of “No Money” was the order of the day from the football house.

“We have been training for the last three weeks; I don’t think we are adequately prepared,” Debbah said.

“It is a problem for the technical staff when the players are not in camp, they go home and we do not monitor their activities.”

“My players have been working hard; we hope they can perform well at the tournament just as they did in Mauritian.”

“From what I know we have not beaten Senegal before but that is in the past, it could be changed if we are given the necessary support,” the Lone Star Head coach asserted.

Liberia last competitive match was a 1-0 victory over Mauritian away in the African Nations Champions, but they were knocked out of the competition on the away goal rule because of their 2-0 home defeat in the first Leg in Monrovia.

Debbah disclosed former professional players like Marcus Macaulay, Sekou Jabeteh, and Isaac Pupo that were invited to justified their inclusion into the team will not make the trip to Ghana because they are not physically fit and unattached.