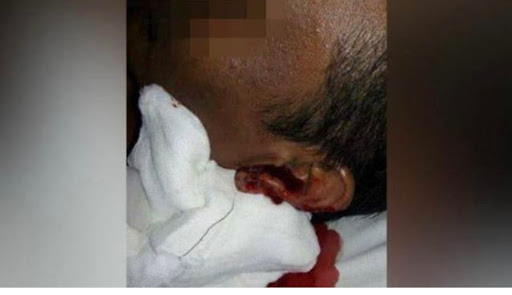 KUALA LUMPUR: A prison warden in the Malaysian state of Pahang had his earlobe bitten off by an inmate on death row on Thursday (Sep 21).

The warden at the Bentong Prison Complex suffered a deep cut to his ear after the Liberian prisoner chewed two inches off his earlobe, the Malay Mail reported.

Bentong District Police chief Mohd Mansor Mohd Nor said the 37-year-old victim was rushed to Temerloh Hospital for treatment while the 46-year-old suspect was transferred to a separate cell.

“Initial investigations revealed that the incident occurred at 2.05pm when the victim and three other prison wardens were ordered to transfer the prisoner to an isolation block,” he said.

“However, the prisoner refused to be handcuffed and became aggressive by attacking the wardens.”

Mohd Mansor added: “The victim and another warden tried to restrain him. In the struggle, the victim was punched on the face, causing him to fall and the prisoner pinned him to the floor before biting off his left ear.”

The three other officials had to use force to release the victim and the prisoner was beaten and handcuffed before being taken to a separate block.

Mansor said the prisoner had earlier been transferred to Bentong Prison in 2016 after being sentenced to death on Aug 16, 2005 on heroin trafficking charges.