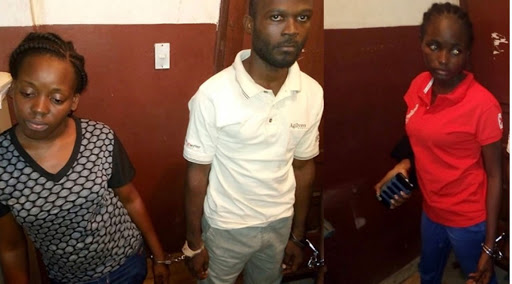 Four persons have been forwarded to the Monrovia City Court by the Police after been arrested and charged with theft of property, forgery and criminal conspiracy for allegedly stealing US$103,298.39 from the Mamba Point Hotel in Monrovia.

Tonia Candy Fortune, Maneplale Morris, Anita Kromah, and Kadiatu Kamara were arrested after a Sierra Leonean national who had slept in the hotel twice and paid US$400.00, had come back to the hotel for his missing phone.

The Sierra Leonean guest is said to have returned for his missing phone but the hotel noticed that his name wasn’t in the system.

According to the charge sheet, the guest’s phone was found, but the hotel wondered why his name wasn't in the system.

An internal investigation was launched, finding the four accused captured on CCTV the hotel camera.

Yashwant Bhardwaj, receptionist at the hotel is said to have seen with co-defendant Kromah allegedly concealing management cash and the system was tampered with.

Some documents to include discount bill, invoices, shift report, and turnout were also tampered with.

The camera captured the defendants loosely distributing cash, causing injury to the management. Kromah, Morris, Fortune, and Kamara were brought at the LNP to answer the question to their involvement in the case.

The defendants are represented by Atty. Migbeh S. Gbartoe from Gongloe and Associates Law Firm.

The four have denied being involved, and said it wasn’t illegal for front desk receptionists to be sharing money while on duty. They say the hotel policy doesn’t forbid it.