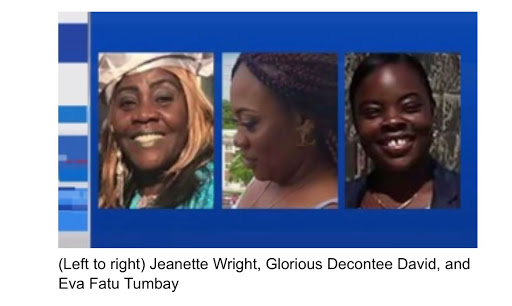 Family, friends and members of Edmonton’s Liberian community are mourning the deaths of three women who were killed in a collision that involved a stolen truck.

Jeannette Wright, Glorious Decontee David, Eva Fatu Tumbay and Janet Wright Gaye were on a road trip to visit family and friends in Minnesota when their minivan was struck around 3 a.m. Friday, a few kilometres east of Lloydminster, Sask.

A 26-year-old has been arrested. RCMP said they were investigating a complaint of multiple stolen vehicles at the time of the crash.

Sophia Service, a close friend of the victims, said she’s “sad they left this world in such a painful way.”

Beyond family and friends, the women are said to have had a significant influence on the Liberian community in Edmonton.

Jeannette Wright was one of the first people to settle in the city from the west African nation, and has since helped others to do the same.

“I was very close to every one of them,” he added. “Their death equally hurts me as much as that of my sister.”

David, who was married to a pastor, left behind four children and many friends in the community.

With a report from CTV Edmonton and files from CTV Saskatoon