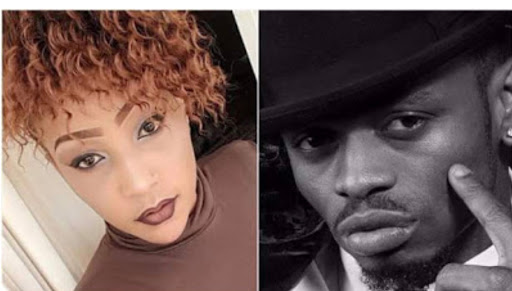 A Burundian woman named Jesca has claimed she has 4-year-old twin daughters who were sired by singer, Diamond Platnumz.

Jesca’s claims come about a week after Diamond Platnumz admitted to cheating on his partner, Zari Hassan, with Tanzanian video vixen, Hamisa Mobetto, who gave birth to Diamond’s son on August 8, 2017.

The 24-year-old woman, who goes by the name "honeyJesca" on Instagram, claims she had a fling with the Tanzanian musician when he went to Burundi to perform and she gave birth to the girls in 2013. 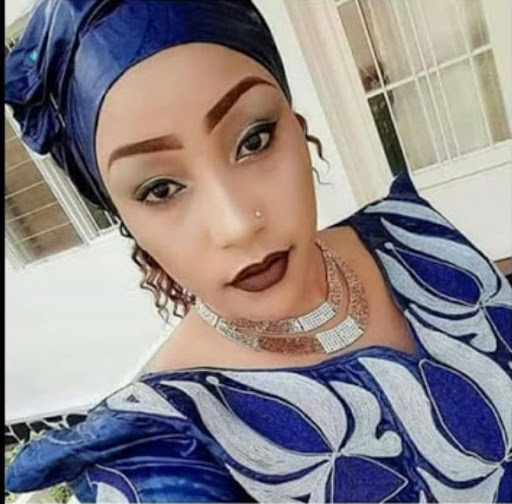 She claims she was a video vixen in Diamond Platnumz’s song called Najuwa featuring Burundian singer Lolilo, which was released in January, 2012.

She claims they first had sex when they were shooting the music video in January, 2012; and the habit would continue every time Diamond Platnumz visited Burundi.

Jesca, who shared on Instagram pictures of herself holding two young girls, says for those who do not believe her, she is ready to allow a test be conducted on the girls to prove that they are Diamond Platnumz’s children.

“The two girls are Diamond Platnumz’s children, whom he sired with me in 2013. I met him when he came to our country for a concert. After his performance, he asked one of his boys, whose nickname was Mafya, to direct me to a hotel room where he was. I went and met him. We got intimate," she wrote.

“Since then, he has never given me any financial assistance. If he does not believe that the children are his, I am ready to let the children’s DNA samples be matched with his. I have not come out now to gain any fame. I am serious. What I am saying is the truth, and the truth always has a way of coming out.

"Please Diamond Platnumz, I have raised these children solely since the day they were born. It is now time for you to take them in and provide for them. I give up,” said Jesca.

Jesca says Diamond Platnumz’s mother, Sandra Sanura Kassim, is aware that her son had sired twins with her.

“Diamond Platnumz, please tell people the truth. Alternatively, send me air fare to come to Tanzania and conduct a DNA test on the children. Sandra Kassim, you know the truth; everything that transpired between your son and I.” 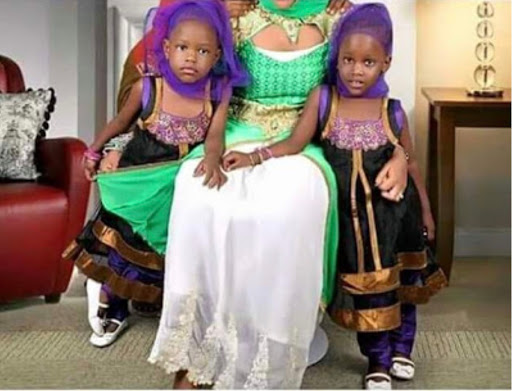 Jesca went ahead to share what looks like a private Instagram conversation between her and a sender, believed to be Diamond Platnumz, showing that Diamond Platnumz was ignoring her, when she requested for money to support the children. 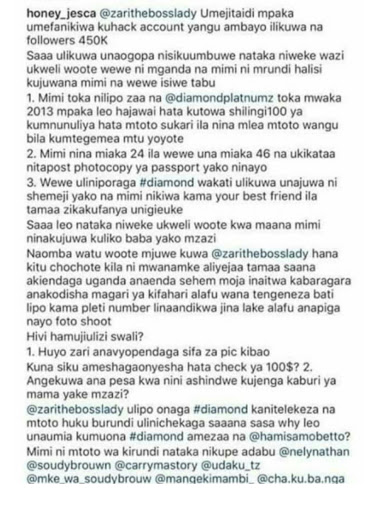 Jesca further accuses Diamond Platnumz’s partner, Zari Hassan, of hacking her Instagram page, which she says initially had 450, 000 followers, and deleted all her posts, which linked Diamond Platnumz to the paternity of her children.

Jesca alleges that Zari Hassan was her best friend until she (Jesca) got pregnant by Diamond, when their friendship ended.

Jesca says she will travel to Dar es Salaam, Tanzania on Monday, September 25 to meet with Diamond Platnumz. 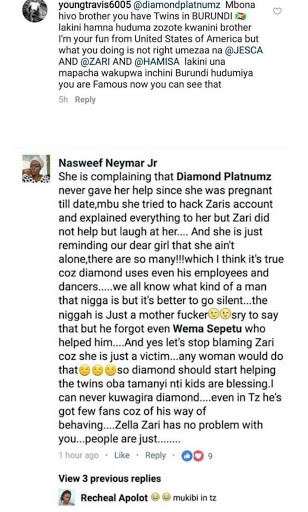