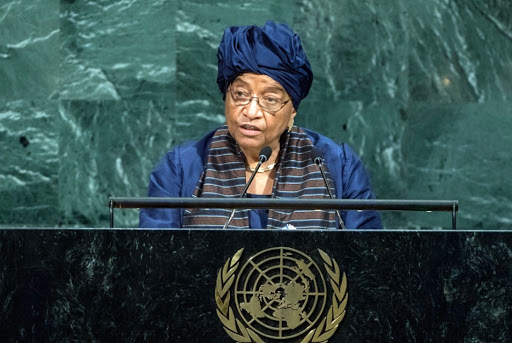 19 September 2017 – Addressing the United Nations General Assembly just 22 days ahead of historic elections in Liberia, President Ellen Johnson Sirleaf today said the polls will signal the “irreversible course” that the country has embarked upon to consolidate its young, post-conflict democracy.

As she recalled that 11 years ago, in September of 2006, she had addressed the Assembly as the newly elected President of Liberia and the first woman to be democratically elected as head of State on the African continent, Ms. Johnson Sirleaf said the coming elections, which will mark the end of her time in office, will pave the way for the next generations of Liberians to lead the country in to the future.

“The [legislative and presidential polls] will mark the first time in 73 years that political power will be handed over peacefully, and democratically, from one elected leader to another,” she said, adding: Democracy is on the march in Liberia and, I believe, on an irreversible path forward on the African continent.”

She said she had assumed office after 25 years of development reversal which was further compounded by a 15-year civil war. “We have made great progress and laid the foundation for the next democratic government. We have reshaped the Armed Forces of Liberia and the Liberia National Police, professionalized our customs and immigration services and small Liberian Coast Guard.”

Further, previously dysfunctional public institutions now have the capacity to respond to the needs of our citizens through decentralized county service centers with ownership by strong local governments. “And from the tragedy of the health crisis, we are strengthening our healthcare systems, prioritizing prevention and delivering capacity at the community level,” said Ms. Johnson Sirleaf, underscoring that Liberia has enjoyed the benefit of multilateralism through full support provided by the UN, the African Union and the Economic Community of West African States (ECOWAS).

“Liberia's transformation was powered by a world community that made a shared commitment to deliver peace to a country, and a subregion, beset by civil conflict and cross border destabilization,” she said, noting that the UN and its partner nations were of “one mind,” and from that global unity, a new Liberian democratic state was born.

“Liberia is a post conflict success story. It is your post conflict success story,” stated Ms. Johnson Sirleaf, urging the UN and its Member States to continue to lead, to spread the values of democracy, human rights, and good governance while strengthening solidarity for economic transformation and social resilience. Such leadership should extend to full implementation of the 2030 Agenda and the Sustainable Development Goals (SDGs), as well as on UN reform, including of the Security Council.