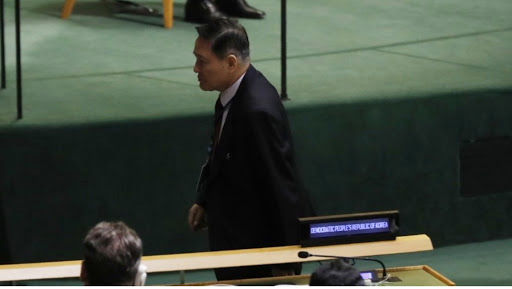 North Korea sent an unspoken message to the U.S. ahead of President Donald Trump's speech at the U.N. General Assembly on Tuesday.

Its ambassador to the United Nations , Ja Song Nam, left the room before Trump arrived to speak. The North Korean mission to the U.N. told NBC it "boycotted" the speech, saying it left only a junior diplomat as a representative in the assembly chambers.

Ja is the permanent North Korean representative to the U.N., beginning his service on Feb. 28, 2014.

The ambassador has been outspoken about the U.S. military presence in South Korea. He wrote a letter on March 6 to the British U.N. ambassador, saying "the situation on the Korean Peninsula is again inching to the brink of a nuclear war" due to U.S.-South Korea military drills, Reuters reported.

The United States has great strength and patience, but if it is forced to defend itself and its allies, we will have no choice but to totally destroy North Korea. Rocket Man is on a suicide mission for himself and for his regime," he said, referring to North Korean leader Kim Jong Un.

Pyongyang has tested ballistic missiles and an apparent hydrogen bomb in recent weeks, despite international economic sanctions and warnings