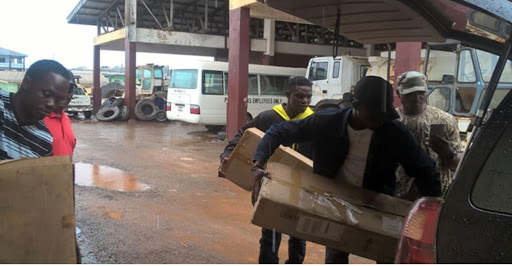 The Ministry of Public Works has returned a donation of traffic and street lights which it accepted back in February 2016 for installation to the donor, Mr. Henries Fubbi, a Montserrado County District 9 representative candidate.

The ministry, however, came under a barrage of attacks on social media for returning the street and traffic lights after keeping it for over a year.

According to FrontPageAfrica, Public Works Minister, William Gyude Moore said the ministry was constrained to return the donation because they are not compatible with the current system installed.

Min. Moore added that the donor was insisting on specific areas he wanted the lights installed, which was unacceptable.

“I’m tired of people going on the radio and hearing people talking about it. He gave us lights that are not compatible to the system we have, people just bring in anything and give it to the country to be used.”

“But he wanted to dictate where he wanted to put it, you can’t tell the ministry where to put the lights, you bring the lights give it to the Ministry of Public works when we choose the place to put it, and we are doing the dedication you can come to make the speech.”

Currently most of the traffic lights in Monrovia are down, the ones at Rehab junction, Catholic Junction, 20th Street, 12th Street, Johnson Street intersection, Randall Street, Capitol By-Pass intersection and Freeport intersection have all been malfunctioning over the last three months.

The Ministry of Public Works, which is responsible for maintaining traffic lights, has said the lights have been off due to electrical failure.

The solar-powered traffic lights were a gift from The People’s Republic of China to Liberia and according to an investigation by FrontPageAfrica, the engineers who installed them did not train Liberians to maintain them.

The Ministry over the weekend called on the donor of the lights (Fubbi Henries) to come and take back the lights after being kept for over a year in the Ministry’s warehouse.

The donor of the lights expressed disappointment in the Ministry for rejecting the lights while all of the traffic lights in the city are down.

“When I did the donation, the Ministry requested that I do traffic count before they can do the installation of the pedestrians’ lights."

"I did finance the process and took the report to the Ministry but up to now, I haven’t heard a word from them until they called me over the weekend to come and collect the lights because they were not using it, the ministry did not tell me why they were rejecting the lights,” he noted.