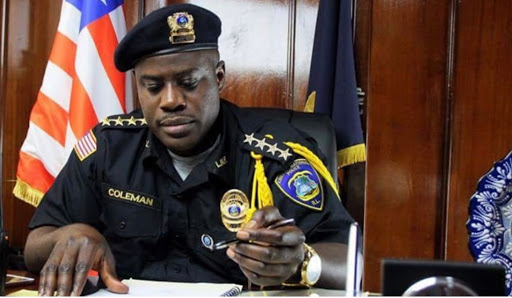 Monrovia – Inspector General of Police, Col. Gregory Coleman has termed recent nude photo of him on social media as sham designed to blackmail him.

He said the photograph was taken at a party sometime in 2012 but was surprised that it was Photoshop with some nude photographs cropped from the internet.

“I’ve been getting numerous calls from people to blackmail me stating that they have video and my naked pictures in circulation,” he told reporters on Monday at the Liberia National Police Headquarters.

The Police Chief apologized to the public and to his family for the public ridicule.

“But these pix have no bearing whatsoever on me; they are not my photographs in any shape or form."

"They are bunch of blackmailers and extortionists trying to bring me in a position where I can be used to compromise the law and maintenance of the peace and tranquility of this nation."

"I wouldn’t transcribe to it because if you give a mice a piece of cookie, it’s going to want a glass of milk. These pictures have no bearing and connections to me,” Coleman said.

He said he is very distracted and currently going through a lot, pleading with the nation to stand with him, adding that the Police will do everything to bring whoever is behind the spread of the nude pictures to book.

“We are working endlessly, we have IT persons working around the clock who have done analysis and noticed that they are cropped photos from the internet and we are looking for the source of the pictures, I will not submit to any form of extortion or blackmail,” he said.

Coleman revealed that he received calls from someone that they had nude photos of him that they would release to the public if he did not pay money.

Coleman challenged the blackmailers to release whatsoever they had “anything they have on me let them go ahead and release it.”

He continued: “I don’t remember doing any nude video and I’m not going to pay anybody a dime because I will not control it; it is meant to distract the police, beyond Gregory Coleman, the safety of this nation, the UNMIL transition and Government transition is more important and I will not be distracted in any form.

“Those that I have spoken to via phone are all Liberians. I can’t tell where it’s coming from and who knows whether it does not have political implication- it could be, everybody got their own hidden agenda and mine is the smooth transition and maintaining the peace.”

He boasted of his LNP’s overwhelming support and commitment to the Police and the nation.