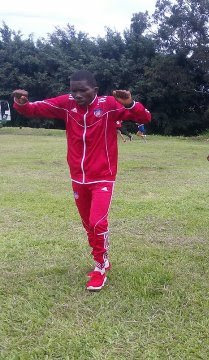 
Liberia’s 5,000m runner Andrew Kpehe departed the country yesterday to participate in the 5th Africa Cross Country Championships in Chlef, Algeria, on Saturday, March 17.
The race is expected to stretch from 8:30 to 4:45 in Chlef, the headquarters of Chlef Wilaya (Province) in the north of Algeria. It is located 200km west of the capital, Algiers.
According to the flight schedule, the one-man Liberian team is expected in Algiers on Friday ahead of the meeting on Saturday.
Yesterday, the 18-year-old flew on Air Maroc for Morocco and will arrive in Algeria to join over 50 countries, including Morocco, Comoros Island, Kenya, Somalia, Ethiopia, Eritrea, Sudan, South Sudan, Tanzania, Rwanda, Burundi, Uganda and host Algeria.
The expenses of the lone Liberian representative were undertaken by the Liberia Athletics Federation (LAF) to the tune of US$2275.
“We don’t have any subsidy in the national budget and we have not received anything from the government to support our national programs and athletes for the past eight years,” Mr. Frederick Krah, the LAF’s vice president for technical affairs and acting secretary general said.
“We hope in the recast 2017/2018 budget the LAF will be given a quick-impact subsidy to boost her athlete’s program, including the National High School Athletics Championship, Kids Athletics and we also hope that in the 2018/2019 pro-poor budget, the LAF will be included,” he said.
The LAF is considered the mother sports of all of the sporting disciplines in Liberia, as well as the Liberian oldest sports, dating back to the early 1900s.
It may be recalled that on Sunday, March 26, 2017, Liberia’s two teenage athletes at the Cross Country Championship in Kampala, Uganda, performed satisfactorily well.
Eighteen-year-old Lucy Massaquoi and 17-year-old Andrew Kpehe finished 93 and 96 among over 700 athletes from Africa, South America, Asia and other parts of the world.
Lucy, the 2011 Liberia female marathon winner, ran the 500-kilometer junior race and finished 93 with a time of 27:41 while Andrew dislocated his arm during the cleaning of the barrel of the lap as he fell on his arm.
Andrew was only able to clock 30:14 and ended the 800-kilometer junior race.﻿