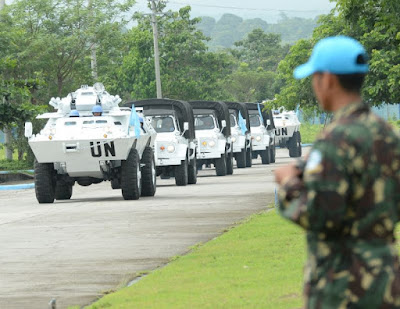 Monrovia (AFP) - A top UN official said Thursday the world body wanted Liberia to deal with the "unfinished business" of its long civil conflict, for which no one has ever been prosecuted for war crimes.
Deputy Secretary-General Amina Mohammed was in Monrovia on the eve of the final departure of a UN mission first deployed at the end of the war in 2003 to guarantee the safety of the population.
Mohammed told AFP that as the mission wound down and the final peacekeepers leave on March 30, the UN was committed to working on "sustainable development and therefore sustainable peace".
She said there would be "an emphasis on the unfinished business, which really is about national reconciliation and the constitution," underscoring the risks of a fragile economy.
President George Weah was accused of sidelining war victims when he chose Vice-President Jewel Howard Taylor, the ex-wife of former rebel leader and president Charles Taylor, as his running mate in last year's election.
Taylor is currently serving a 50-year sentence for war crimes in a British jail cell, although he was convicted of funding rebel groups in Sierra Leone, not the recruitment of child soldiers, killings, rape and pillaging of which he is accused at home.
An estimated 250,000 people died in the back-to-back 1989-2003 conflicts.
The president has not made specific commitments to reconciliation since taking power in late January, but on Thursday said his government must ensure "that either we forget or justice is done to those justice needs to be done to".
He emphasised that perpetrators had to "face their victims", but did not elaborate on how.
Weah meanwhile said the UN had the government's "fullest commitment to the continued consolidation of peace in Liberia" and would "warmly welcome a continued partnership".
A Truth and Reconciliation Commission (TRC) set up by former president Ellen Johnson Sirleaf to probe war crimes and rights abuses said a compensation scheme should be created alongside a war crimes court to prosecute eight ex-warlords for alleged crimes against humanity.
None of those measures has been implemented.﻿