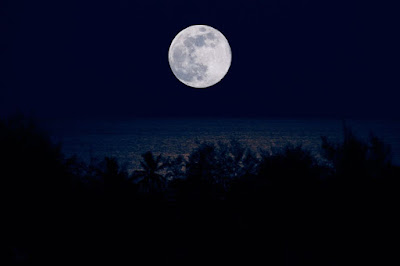 ﻿
If you missed March's first full moon on March 2, don't worry! There's a second full moon on the last day of the month.
March's second full moon reaches peak fullness on the morning of March 31 at around 8:37 a.m. EST.
A second full moon in a calendar month is commonly called a blue moon, but that's not the astronomical definition of a blue moon. Astronomers refer to a blue moon as the third full moon in a season with four full moons, as most seasons have only three full moons. And don't let the name throw you for a loop: this moon does not appear blue.
The phrase "once in a blue moon" refers to something that's rare, and a blue moon is decidedly uncommon. The next seasonal blue moon occurs on May 19, 2019, and two full moons that occur in the same calendar month won't happen again until October 2020 when full moons will start and end the month.
Blue moons weren't exactly rare this year, however. There were two full moons in January, making 2018 a year of blue moons. Such a doubling up of calendar month blue moons won't occur again until 2037, and those will also occur in January and March.
And, if you want to go ahead and mark your calendars even further aheaed, TimeAndDate.com has a few other blue moon combinations for you to keep in mind.
"Between 1550 and 2650 there are 20 years which have one seasonal and one monthly blue moon. The next time is in 2048 while the previous time was in 1934. Triple blue moons, a combination of one seasonal and two monthly blue moons in the same calendar year, happens 21 times in the same time span. The next is in 2143, while the last time was in 1961."
OK, so it's probably unlikely anyone reading this will be around for that triple blue moon in 2143, but maybe we'll have figured out cryogenic freezing or putting our consciousness into robots before then.﻿