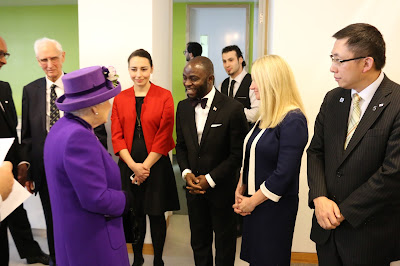 Liberia’s Permanent Representative to the International Maritime Organization was part of a select group of Maritime Representatives who held a privileged discussion with Her Majesty Queen Elizabeth II on Security and Ports during her visit to the headquarters of the International Maritime Organization in London.
According to a dispatch from the UK, Her Majesty’s visit was in commemoration of the seventieth anniversary of the adoption of the convention of the International Maritime Organization, where she unveiled the commemorative plaque.
According to Ambassador Jackson “It was an honour to have met and engaged Queen Elizabeth II. I assured her that Liberia remains a traditional leader in the Maritime sector. When I reminded her that Liberians still have fond memories of her visit to Liberia in November 1961, she broadly smile and said “it has been a long time,” and indicated that she was glad to have met me.”
Liberia has held Diplomatic relations with the United Kingdom since the country’s first President Joseph Jenkins Roberts visited with Queen Victoria in 1848.
﻿