“No Journalist Will Be Arrested” - Information Minister Assures 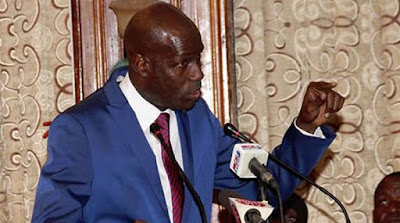 Information Minister Eugene Nagbe has announced that no journalist will be sued or arrested during within  the next six years.


Liberia’s Information Minister Len Eugene Nagbe speaking at a weekly press briefing said, the government is committed to protecting free speech and freedom of the press, because they are vital tools in strengthening democracy, and building a better society the world over.
Minister Nagbe said the Liberian government is focused more on building a strong economy- opening more schools, building more roads, providing affordable healthcare for poor families, creating jobs and reconciling the country after more than two decades of civil strife.
He said Journalists can rest assure the new administration will support any move that will protect them in line with their duties.
Minister Nagbe who is also a veteran Journalist said there is a direct link between freedom of speech and vibrant democracy.
According to him, Free speech is an indispensable tool of self-governance in a democratic society. It enables people to obtain information from a diversity of sources, make decisions, and communicate those decisions to the central government.
The Liberian information Minister lamented that, free speech facilitates majority rule.
"It is through talking that consensus is encouraged; thus helping citizens to form collective will," the Minister said.
“Respect the Table Mountain Declaration”
The information Minister also wants other cabinet Ministers to respect the laws that protect free press and speech.
He said the Table Mountain Declaration and the Freedom of Information Law were signed into law by President Ellen Johnson Sirleaf few years ago; and must be respected.
Liberia’s constitution provides for freedoms of speech and the press, but these rights were often restricted in practice by past governments.
In July 2012, President Ellen Johnson Sirleaf became the second African head of state to endorse the Declaration of Table Mountain, which calls on African governments to abolish criminal defamation laws.
Although in January 2015 the President reiterated her desire to see the country’s criminal defamation laws repealed, no action has since been taken on a draft bill submitted in 2014, and such cases were still being brought to court in 2015, often with political undertones.
Liberia’s libel laws also allow for large financial awards in civil suits, which can cause severe economic difficulties for journalists and media outlets, fostering self-censorship.
In 2010, Liberia enacted West Africa’s first freedom of information law.
Journalists and the public have the right to access any public document, with exemptions for those related to national security.
In 2013, a court in Monrovia heard the country’s first freedom of information case and ruled in favor of the plaintiff.
The courts played a notable role in safeguarding press freedom in Liberia during 2015. In August, the Supreme Court ordered the National Chronicle, a newspaper that had been closed by the government in August 2014, to be reopened.
The closure followed complaints from national security officials about articles alleging the planned creation of an interim government that would unseat the President.
The authorities had argued that the newspaper’s closure was necessary to preserve national unity during the state of emergency.
However, the court ruled that, since the state of emergency had elapsed in November 2014, keeping the Chronicle closed was “a violation of the [journalists’] rights not supported by the laws.”
Also during the year, the PUL, an umbrella organization for Liberia’s media professionals and institutions, demonstrated its autonomy in advocating for members who were at loggerheads with the government. ﻿