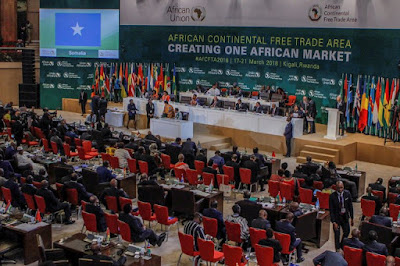 ﻿
African heads of states and business leaders from across the continent gathered in Rwanda's capital Kigali on Wednesday (March 21), ahead of a historic signing of the African Continental Free Trade Area (AfCFTA), an agreement that would pave the way for continental commerce.
Meeting business leaders ahead of the signing on Wednesday, Rwanda's president Paul Kagame addressed delegates and reiterated the need for the treaty, which he said would boost low levels of intra-regional trade, key to the continent's economic well-being.
"This agreement is about trade in goods and services. These are the kinds of complex products that drive high income economies," said Kagame.
However, the event was overshadowed by the announcement that Nigeria's President Muhammadu Buhari will not be attending Wednesday's signing of the framework agreement.
AfCFTA, the brainchild of the African Union was meant to be signed by all 55 members states of the AU, bringing together 1.2 billion people with a combined gross domestic product (GDP) of more than 2 trillion US Dollars.
Nigeria, the continent's most populous country had been one of the foremost champions of the AfCFTA which has been in the works since 2012.
Implications of Nigeria not joining
Analysts say Buhari may have caved under pressure from local labour unions and big corporations who have opposed the treaty saying it would harm the local economy.
Analysts say Nigeria's withdrawal from the treaty would be a huge blow to the continent, although hopes are still high that the West African giant will join in at a later stage.
"If Nigeria does not join, it will have an impact definitely. Nigeria is 190 million population country, it's a large economy. Like I was telling you, we happen to have Aliko Dangote who is African's richest man, and is co-chair of the Afro champions. So we hope that Nigeria will not pull out of it. Nigeria had already been part of the process of building it, we think it's just maybe one step back that they are taking to review. My understanding is that they want to review again some aspect of the AfCFTA," said one economic economist Alpha Sy.
At the moment, trade between African nations accounts for around 10% of the 55-nation continent's total commerce, a ratio that has been in gradual decline over the past decade and which compares unfavourably to 25% in southeast Asia.
"One of the challenges for African trade is the fact that African countries do very little manufacturing and processing, locally. There has always been the question of when are we going to trade? if most of what we do is really producing raw materials and a lot more services as it has been seen in the last decade or two. Yes you are right, it's an important challenge. If the Africa free trade area is to work, it's important that we see more manufacturing and agro processing and processing generally in the continent. Otherwise there is very little production to trade with our neighbouring countries," said economic analyst, Michael Kottoh.
Few question the economic power of freer trade but sceptics say Africa's infrastructure and the lack of consideration on the varying production capabilities of African countries are still major challenges for the implementation of the AfCFTA.
The AfCFTA legal framework is to due to be signed on March 21, and will then be ratified by individual countries.