Trump gives Liberian government 12 months to reintegrate Liberians who have been living in the United States. 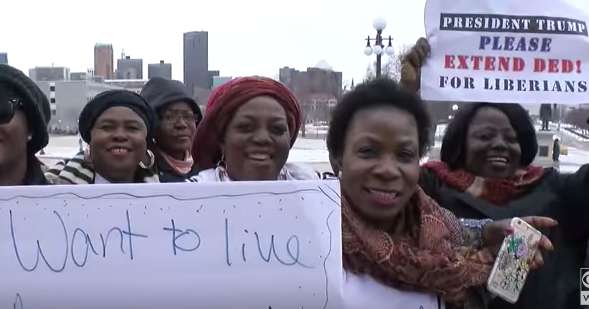 
Some Liberian immigrants living in the States have been eligible for Deferred Enforced Departure (DED) or Temporary Protected Status since March 1991 due to civil wars and armed conflict in Liberia. Former President Clinton first authorized DED in 1999 after a civil war in Liberia ended, the White House memorandum stated. Since then, the Bush and Obama administrations have extended the program. Under the Trump administration, however, the special status, which expires on March 31, will end in one year. Newser reported there are currently 839 Liberians who've obtained a valid work status because of the program.


"Through consultation with appropriate executive departments and agencies and my advisors, I have been informed that conditions in Liberia have improved," Trump's memorandum read. "Liberia is no longer experiencing armed conflict and has made significant progress in restoring stability and democratic governance. Liberia has also concluded reconstruction from prior conflicts, which has contributed significantly to an environment that is able to handle adequately the return of its nationals."
Nancy Harris, who has been in the United States for 18 years with her husband, told reporters on Monday – prior to Trump's memorandum – that the thought of leaving her daughter is "emotional," ABC News reported.


"This is home for me, and the thought of leaving my daughter is emotional," she said. "I’m pleading with the president and Congress to extend DED."
Trump has instituted a 12-month "wind-down" period, which the president states would allow the Liberian government time to reintegrate Liberians who have been living in the United States.
The Trump administration will officially terminate DED on March 31, 2019.