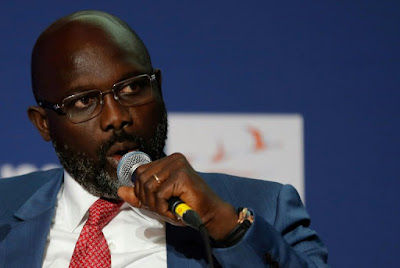 Liberia’s new leader, ex-football player George Weah, on Monday lent the number from his national team jersey to a military hospital as he unveiled the first major project of his presidency.

The “14 military hospital” will primarily care for Liberian soldiers returning from peacekeeping missions abroad, who are currently obliged to seek treatment in foreign countries due to a lack of specialised facilities.
“The number 14 was the number on my back playing for the Lone Stars (national team). The number is now attached to this important new institution as a symbolic reminder of what Liberians can achieve,” Weah told journalists.
The hospital will be located in the Edward Binyah Kesselly Barracks, close to the capital Monrovia.


Liberia’s police and army were disbanded after back-to-back 1989-2003 civil wars, and security was assured by a UN peacekeeping mission finally due to leave on March 30.
The security forces took back responsibility from the UN last year, but the mission has remained in place to wind up its last projects.
Weah noted he had made promises to the armed forces during his campaign.
“I pledged my commitment… to building an army of professionally trained soldiers who are well paid, educated and cared for medically,” he said.
“I pledged to build a hospital exclusively for youths of the army and other security forces,” he added. “It is the first step toward fulfilling my commitment to build a modern and professional Liberian army.”
The security forces won accolades for their professionalism during last year’s presidential election, their first major test without UN support.
Inaugurated on January 22, Weah meanwhile faces a slew of economic problems including a depreciating currency, mass unemployment and depreciated commodity prices.
﻿
﻿