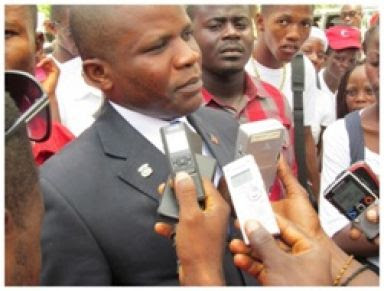 
President Weah’s recent appointment of former Montserrado County Lawmaker, Gabriel Nyenkan, as head of Secretary of LEITI (Liberia Extractive Industries Transparency Initiative) has been received by a wellspring of criticism from various civil society organizations (CSOs) on grounds that it violates the law that established the anti-graft institution in 2009.
In total disregard of the law, Mr. Nyenkan, along with a group of supporters, many of them CDCians, took armed police officers to the headquarters of LEITI to effect his takeover of the entity.
This was after reports had surfaced on social media, indicating that the LEITI head of secretariat, Konah Karmo, had refused to turn over to the President’s new appointee.
Mr. Karmo was at the time meeting with several government officials, including the Executive Director of the Liberia Institute for Public Administration (LIPA), Bill Twehway, when Nyenkan and his armed police officers stormed the compound, creating total havoc and panic among employees.
Karmo was appointed by the Multi-Stakeholders Steering Group (MSG) of LEITI in 2014, following a competitive recruitment process in which several other individuals and institutions participated.
However, immediately following Nyenkan’s appointment by President Weah, the MSG called on him to reconsider his decision to “enable the entity fully focus on the crucial task at hand before the country’s next validation due in a few months.”
But the President has remained impervious to its (MSG) heeding. The MSG has the statutory mandate to oversee LEITI, which is a tripartite conglomeration of civil society, private sector/companies and the government, in accordance with Section 2.2 of the Act that established it.
The LEITI Act of 2009 requires the President to appoint members of the Multi Stakeholders Group (MSG), and “shall designate one of them as the Chairperson and another as the Co-Chairperson”.
“The power to recruit the Head of Secretariat, Deputy and other staff members of the LEITI Secretariat therefore lies with the MSG, which should comprise of members of the legislature, CSOs and the Executive,” according to Section 6.3d of the LEITI Act.
The Center for Transparency and accountability in Liberia (CENTAL), one of the CSOs against the move, says the sanctity and credibility of integrity institutions must remain intact. “The government, especially President Weah, must do nothing to undermine that, whether directly or indirectly,” CENTAL said.
“The Center for Transparency and Accountability in Liberia (CENTAL) is disturbed by the action of President George M. Weah to appoint the Head of Secretariat of LEITI, in violation of the Act creating the integrity institution,” says CENTAL’s Executive Director, Anderson Miamen.
Miamen indicated in a release that the President overstepped the limits of his authority by ascribing to his office unassigned powers, something which is worrisome and must have no place in the new Liberia.
“The rule of law is a fundamental pillar of our maturing democracy and such arbitrariness has the propensity to reverse gains made in strengthening governance and the rule of law in the country,” he noted.
Though the Section 6.5 of the LEITI Act of 2009 ascribes the appointment of members of the MSG to the President, Section 6.3(d) grants the MSG the “power to recruit and dismiss the Head of Secretariat, Deputy and approve the recruitment of other staff members”.
“CENTAL believes that the law must be upheld if the credibility of LEITI must remain intact. We therefore call on the President to refrain from taking actions that have the proclivity to undermine his commitment to fight against corruption and promote transparency and accountability in government,” Miamen noted.
Taking armed officers to effect a takeover of a public office, in the view of the public totally contravenes the laws of the land. According to a legal expert, Mr. Nyenkan should have rather filed a writ of Quo Warranto before the Supreme Court.
A Quo Warranto is an English writ formerly requiring a person to show by what authority he exercises a public office, franchise, or liberty. “According to the laws of Liberia, only a Court of Competent Jurisdiction can order a public official out of office,” he said.
“But what is sad”, according to the legal expert (name withheld), “is that our governments never use this writ nor the laws controlling, but always result to use of Police force, as if this country is a police state. What is even sadder is that we have renowned lawyers who, when not in government, condemn these actions; but they do the same when they are appointed at the Ministry of Justice (MOJ),” he said.
It can be recalled that former President Sirleaf took similar arbitrary action in 2015 when she ordered armed officers to evict officials of the Liberia National Red Cross who were accused of corruption.
“Unfortunately, LEITI was a scene of the same police-state action and this should not be happening in a democratic state.” He wondered whether President Weah will govern Liberia by the Rule of Law and the Constitution as he promised.
“We should be careful how we use police power in this country before we revert to our dark days,” he added.