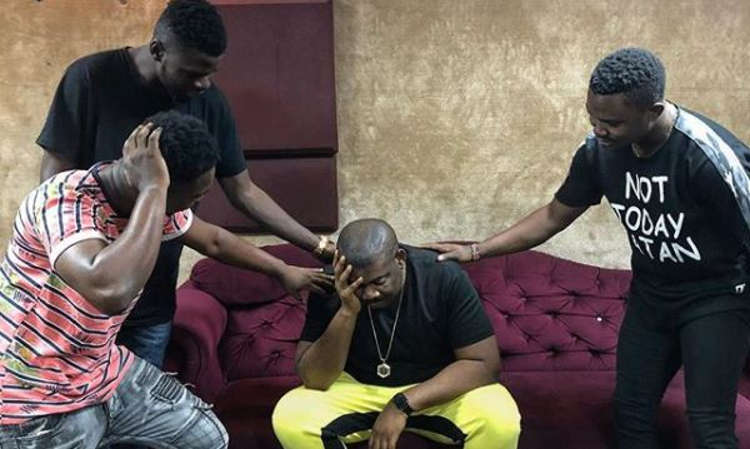 Music mogul, Michael Collins Ajereh a.k.a Don Don Jazzy, who has not hidden his crush on famous blogger Linda Ikeji, `weeps’ over the news of her engagement. According to some online reports on Wednesday, Linda’s ex-boyfriend recently relocated to Nigeria where the lovebirds decided to rekindle their love affair and got engaged.

Friends console Don Jazzy over news of Linda Ikeji’s engagement Don Jazzy, whose hidden crush on the famous blogger excited fans, posted a picture on his instagram @donjazzy as he was being consoled by some friends over his dashed dreams of making Linda his `wife’. He also wrote with a crying emoji’s: Kai Linda is engaged.. It is finished.’’ Don Jazzy made several moves that he ‘proposed’ to her on social media and frequently made various posts on his instagram handle; one of such was a recent photo of Linda with the caption “When you re fine you re fine abeg.” Peter Okoye of the defunct PSquare, offered to sponsor his wedding with Linda if Don J made good his promise. Meanwhile Sandra, Linda’s sister confirmed the good news on her instagram handle on Wednesday. Sandra wrote @sandra_Ikeji: congratulations @officiallindaikeji So habby sweet sis! This tells me that sometimes the wait is worth it. Can’t wait to plan your special day @eventsbysi are you readyyyy #itsagetaway. The news was also confirmed by another sister Laura, @lauraikeji who wrote, “Congrats Linlin @officiallindaikeji.” The 37 year old blogger and entrepreneur, is yet to confirm the news.