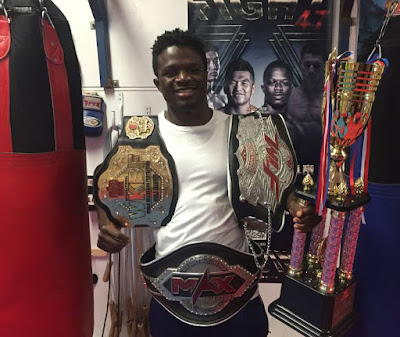 ﻿
Promising kickboxer Victor Nagbe returned from China having successfully qualified for the Ultimate Championships after he won the four-man Kunlun Fight Clash of the Titans.
Nagbe now advances into a 16-man tournament against some of the best Muay Thai kickboxers in the world. The 16-man tournament is a knockout event and will start in August – but Nagbe has some valuable fights in the lead-up.
A rematch with the world-renowned Baukaw is something that is extremely exciting for Nagbe.
The 24-year-old fought the kickboxing icon five years ago and now believes he is much more accomplished to take on one of his idols.
Nagbe will return to China to fight on May 21, one of a number of fights he will have in his preparation.
There is no doubting Nagbe is one of the most exciting kickboxing talents in the country and it is something he certainly does not take for granted – his appreciation and understanding for where he has got to is not lost on him.
Born in Liberia, he was raised in Australia.
Growing up in Queensland, he also spent a few years in Thailand – training full-time – eventually returning in 2015 to live in Melbourne.
The fast-paced lifestyle of Melbourne was not for Nagbe, and coupled with injury, he decided to take a year off to “find himself”.
He chose to move to Ballarat and now trains at his gym – Victory Zone.
The benefits have been obvious, a rejuvenated Nagbe has gone from strength to strength and has a greater understanding of what it takes to be successful.
“I had a year off, just trying to get myself together,” Nagbe said.
“In life, to be successful, you need to find yourself.
“I’ve got good people around me, I’m pretty happy right now. Melbourne was too much for me, too busy.
“I like it here, it’s way more quiet and the people are way more down to earth. When life hits you, you just need to step back, look around and see how you can fix things.”
Nagbe’s Mum, who worked tirelessly for the family, originally thought he would play basketball, but Nagbe feels fighting discovered him rather than him seeking it out.
Nagbe will continue to build towards August and is hoping the Ballarat community can support his journey.
“Right now I’m just working on building myself up slowly...I call Ballarat home now, I hope everyone can support me, because I’m not just doing this for me, I’m doing it for Australia and I feel that it’s really important.
“For some reason fighting found me, I didn’t find fighting, it found me.”
Nagbe’s career to date has seen him win 53 of his 66 fights which has quickly made a name for himself on an international scale.
﻿
﻿