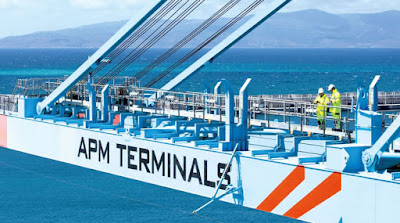 According to FrontPage Africa the National Port Authority (NPA) has demanded that marines operations and the weigh bridge activities be handed back to NPA from APM Terminals.
The source disclosed that the Port Management on Friday, March 23, met with the APM Terminals in a meeting and demanded that APM Terminals turns over the marines operations.
It is reported that the APM Terminals generates a little over US$7 million for marines operations annually, with the port by extension Liberia, benefiting only US$4000 from that amount.
According to the contract between the Liberian government and APM Terminals, APM Terminals is allowed to operate the port and after five years the Marines Operations and Weigh Bridge aspects be handed back to NPA based on the NPA request to APM through a written communication.
It is reported that NPA in 2017 under the administration of former NPA Managing Director David Williams, requested the APM Terminals to turnover the Marines operations to NPA authority. But this newspaper understands that that request did not materialize.
But the current APM Terminals management, according to our sources, has ignored the port's communication and is still operating the Marines Services.
The Marines Services and Weigh Bridge operations raised millions of dollars annually and such funds are not going into government's coffers but the APM Terminals’.
According to sources, the APM Terminals has generated over US$38 million within the last six years of operations and the Liberian government through the port has only received US$28,000 out of this amount.
According to our source, the Friday, March 23, meeting was fruitful and the APM Terminals is willing to hand back the Marines Services and Weigh Bridge Operations to the NPA.
However, one sticky issue erupted during the discussion and nearly stalled the whole progress of the discussions.
Our source stated that APM Terminals has gone seven years, two extra above the five years in the agreement and the NPA Management is asking them to remit the money they accrued in those two years into the Liberian government’s account.
“When the discussions became heated, APM Terminals appealed that NPA should wave the two years it owes the port in Marines services operations,” our source said.
FPA is told that the port management is adamant that APM must pay the two years before turning over the operations to it.
Negotiations are said to still be on going between the parties.
When contacted to confirm the meeting between the NPA and APM Terminals, the Communications Consultant of the Port, Prince Weah refused to explain in details but confirmed that there are negotiations underway for the NPA to take possession of the marines and weigh bridge operation.
Mr.  Weah also confirmed the meeting between the NPA and APM Terminals but failed but provided to further details.