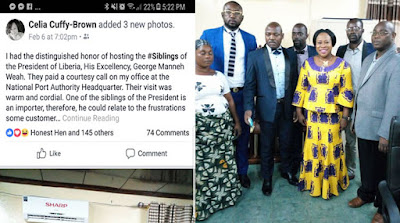 On Monday March 12 Celia Cuffy-Brown defended her actions on a local radio talk show saying if she should make the similar decision, she would make it “10 more times without looking back”.
“First of all, I think the President must have trusted my judgment when he hired me to work …, if I need to make a decision, I am not going to the President to ask because we have to respect human dignity,” said Celia Coffey-Brown.
Cuffey-Brown crossed carpet to the leading opposition political party at the latter stage of the 2017 elections campaign as the Coalition for Democratic Change crusaded against nepotism, waste, and abuse of power amongst several other missteps by its predecessor.
However, a recent FrontPageAfrica investigation uncovered what appeared to be a major case of payroll padding, corruption, and allegations of nepotism and mismanagement at the Free Port of Monrovia.
As the current NPA Acting Managing Director, she recently hired several individuals – all last named Weah as consultants to positions inside the scope of existing jobs already occupied.
Those recently hired are to be paid salaries four-times more than individuals who head these departments.
Her actions received heavy criticisms as Economists expressed fear that it might retrogress early gains at the economic hub.
But when the acting NPA boss appeared on Prime FM in Monrovia on Monday, she again defended her action terming FPA reports of her arguable decisions at the NPA as “nonsensical publication”.
She also retracted her previous comments, stating that President Weah was not knowledgeable of her actions to hire his brothers.
“I campaigned for equal opportunity in Liberia; I didn’t campaign to look at the names of people who applied to my office for a job,” she said, while admitting to have hired three persons, surnamed Weah.
Later during the show, Cuffey-Browne somersaulted on her previous defense revealing that, “The President was pissed off when he called because it would have be a negative publication, Just as I’m answering you, I said ‘Mr. President, I employed people who wanted jobs because they are Liberians.”
“You're talking about the President’s brothers, if 10 of the President’s brothers should have come to me should I ask, ‘is your name Weah? Are you related to the President?’”
She argues about “needing trusted persons to do the job”, while stuttering to explain the term of reference of the new consultants she claimed that she “needs someone to independently read leases” that were signed by the previous administration.
In her apparent move to save face, she drew a comparison with members of the Weeks family, who held lucrative positions in the Ellen Johnson Sirleaf’s government including top positions at the Central Bank of Liberia, the Liberia Telecommunication Authority and Public Works Ministry.
“What happened to the three Weeks (who worked in the Ellen Johnson Sirleaf Government)… if you want to go to the Weah then let’s go to the Weeks…, three Weahs on Executive Directors level and they have a performance contract making US$4,050. Can you compare the salaries of the Weeks with the Weahs?”
Justifying further, she said: “If my PR (public relations) person is the brother of the President, it has a great advantage for me and the corporation as well… I had people on my consultant list that were making far more than what I am paying these people here.”
Madam Coffey-Brown said she couldn’t turn down brothers of the President who were asked by him to “go out there and find your own job, I am not going to appoint you.”
She inferred that assuming a responsibility of hiring and supervising brothers of the President as a privilege, while claiming to be “jeopardizing herself” by risking her long service of 25 years to take on an appointed job which requires serving at the will and pleasure of the President and can get fire anytime.