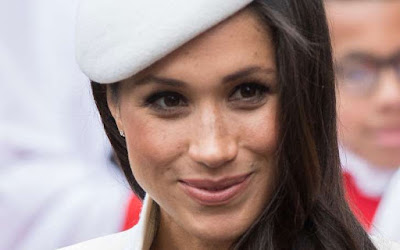 The actress accompanied her fiancé Prince Harry and the Duke and Duchess of Cambridge, Prince William and Kate Middleton, to the U.K.’s biggest annual inter-faith gathering in Westminster Abbey, gaining attention for her ensemble.
Markle showed up to the Commonwealth Day Service in a cream-colored coat by British designer Amanda Wakeley ($1,199; orchardmile.com) and a fashion accessory beloved by another member of the royal family.
The actress wore a white beret to the service created by hat-maker Stephen Jones, who's known for producing a variety of berets for Princess Diana during her 20s.

Meghan Markle's beret today is by Stephen Jones, also preferred milliner of the late Princess Diana, who wore one of his berets in 1982. I love a fashion homage. Also, I'm not crying, you're crying. pic.twitter.com/VRR9OVmj4y
— Kate Bennett (@KateBennett_DC) March 12, 2018

“She really loved the world of fashion, and she liked the people in it,” Jones told Vogue in a recent interview. “It was an escape for her.”
Markle also donned a brown beret to the Christmas Day Church service with the royal family in December.
Markle accompanied the royal family to Westminster Abbey, where the royal wedding will take place next summer, for the celebration that included some 2,000 other guests, according to NBC.

The Duke and Duchess of Cambridge, Prince Harry and Ms. Meghan Markle arrive at @wabbey for the #CommonwealthDay Service.

With a theme of “Towards a Common Future,” the occasion brought together leaders from 53 independent countries that participated in speeches, discussions of traditional hymns and readings, and performances from British artist Liam Payne.
The Queen is the head of the global Commonwealth network and has been throughout her 66 year reign, continuing the historic tradition this year.

The Queen has been Head of the Commonwealth throughout her 66 year reign. Today is a chance to celebrate the communities which make up the 53 countries of the Commonwealth. #CommonwealthDaypic.twitter.com/wJKfEicIou
— The Royal Family (@RoyalFamily) March 12, 2018

This isn’t the first time Markle has been noticed paying tribute to Prince Harry's late mother: The 36-year-old has two diamonds from Diana's collection featured in her engagement ring.﻿