13 African Diplomats Pay Coutesy Visit to the President of Liberia 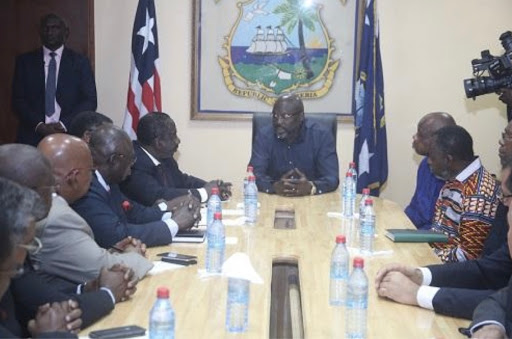 According to an Executive Mansion released, the African diplomats were led by Guinean Ambassador and Doyen of the Diplomatic and Counselor Corps H.E. Abdoulaye Dore. The African diplomats congratulated President Weah for his election and subsequent inauguration on Monday, January 22, 2018.

Addressing the diplomats, President Weah commended the African diplomats for the visit and thanked them for working with Liberia towards the conduct of peaceful, free and credible democratic elections.

President Weah expressed his administration’s commitment to working with the African diplomats representing their various countries in Liberia with a view to fostering stronger ties based on mutual respect.

The Liberian leader used the occasion to draw the 13 African diplomats’ attention to the issues of human trafficking and slavery currently taking place in the North African State of Libya and called for prompt solution.

He then assured the diplomats of his administration’s commitment in working with all countries on the African continent through regional groups including the Mano River Union, the Economic Community of West African States (ECOWAS) and the African Union (AU).