DJ Blue Expresses Interest in Montserrado County Senatorial Seat - Our culture and creative industry of Liberia have been dormant, not a single legislation passed in the last 12 years to impact 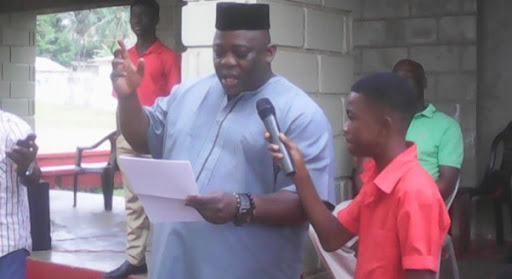 Benson joins a list of several other popular Liberian entertainers who have also switched to politics.

“I’m delighted to inform you that I organized an exploratory committee, a team to highlight the possibilities of me contesting the by-election for the senatorial vacancy left by President Weah,” he said on Tuesday, January 9 in Monrovia.

He said it is frustrating that most of those who are elected to the House of Representatives and Senates do not show key interest in improving Liberia’s culture and creative industry.

Their quest, some say, was to shift the dynamics of entertainment from retrogression to progress.

Although the two entertainers were unsuccessful in their bid to move to the Capitol Building, they campaigned about putting forth a legislation that would help promote the country’s musical industry.

At the installation of student leadership of the School of Prime System in Morris’ Farm, Montserrado County, Benson said there is increasing need to have a representation at the National Legislature who will fight for the creative dreams of Liberian youth.

“Politicians will say, when I get there, I will do this and that, but I say before you even consider me, see my work of innovation and developments in our creative industry over the years, perhaps over 500 young people employed and trained,” he said.

The Liberian entertainment promoter emphasized the need for the Liberian media to change their style of making politicians the “big stars and focus on promoting the country’s culture and creative industry”.

He also expressed frustration in the lack of support for Liberians who help promote the country’s image in the diaspora, saying such attitude must change.

Speaking under the Theme: “Key for successful leadership”, Benson, meanwhile, noted that leadership is about impacting others. He urged students to begin to change of course of actions at their level.

“Leadership is about impact, in order to lead a group of individuals with diverse background, skills ability and interest, it is essential to understand what drives and inspires them,” Benson asserted.

He encouraged the students to “hold on to humanity, be team players and exhibit intelligence as the bedrock of their journeys if they truly intent to lead”.

He said instead of Liberia’s creative industry be place at the back, it is important to promote it. He called on Liberians to support him in the upcoming senatorial by-election.