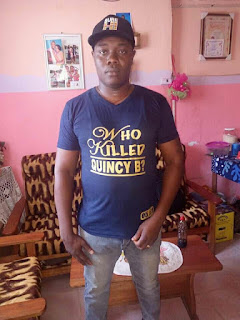 Liberian promoter Milkman posted a picture of him wearing a shirt that reads "Who killed Quincy B?"

This picture has reinforced rumors that the Singer got killed by some unknown individuals.

Quincy B died on March 3, 2017 in a vehicle accident involving CIC, Feouls Kaba and Margass.  Some are speculating that his death was a homicide.

The singer died instantly while CIC broke his leg, and two other artists survived with no reported injuries.