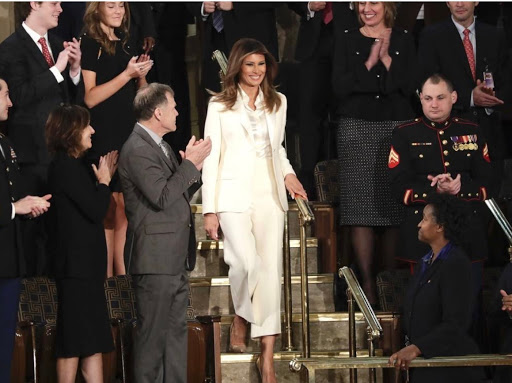 Not only did first lady Melania Trump garner attention when she broke with long-standing tradition by arriving to the State of the Union separately from the president on Capitol Hill on Tuesday night, but her outfit also sparked speculation across social media about whether she was quietly making a political statement.

When the first lady, wearing a white two-piece suit and white shirt, took her seat ahead of the president's address, many on Twitter wondered if her choice of dress was a nod to women's rights or a sartorial tongue-in-cheek move to stoke speculation.

Traditionally, women in the suffragette movement were encouraged to wear white as a symbol of the movement.

Last year, when Trump addressed his first joint session of Congress shortly after his inauguration, Democratic lawmakers like Rep. Debbie Wasserman-Schultz and House Minority Leader Nancy Pelosi wore white in support of women's rights, saying it was "in spite" of a president that didn't.