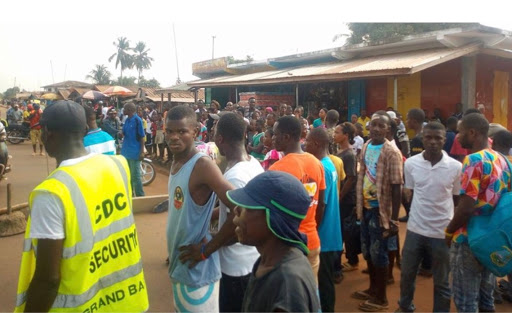 Poll workers of the 2017 Presidential and representatives elections in Grand Bassa County on Saturday staged a protest action in Buchanan City demanding payment of their salaries from the National Election Commission.

The elections workers, mostly youth, showed up in hundreds, paraded and blocked the major street of the city.

They were angrily chanting slogans against the county’s office of the Elections Commission.

Uriah Myers, head of the aggrieved poll workers, told FrontPageAfrica “it has been a very long time” since the conduct of the December 26 presidential runoff election but they are yet to receive their pay.

“Other counties have received their money but for us in Grand Bassa County, David Logan, the magistrate (of NEC) has refused to pay our money,” Myers said.

“We are going to be in this street until our plight is met.”

He continued: “Some of us credited money from friends and families to go do the National Election Commission work in the various districts and they're behind us for their money and we must get our money to pay our debts.”

They claimed that they are not been treated fairly by the commission after experiencing sleepless nights before Christmas just to ensure the job was done efficiently.

Trokon Tamba, an aggrieved polling staff, said he was unable to enjoy their Christmas because he was deployed faraway from home.

“We left our families on Christmas day, risk our lives to go into the interior just to do the work than they are refusing to pay us, that is complete wickedness and ungratefulness," Tamba lamented.

They blocked the streets of Buchanan for over an hour, stopping regular movement of people and the traffic.

The Liberian National Police later intervened to calm the situation, but the poll workers threatened to restage the protest if their plight is continuously ignored.

Eddie Williams, County Information Officer, assured the aggrieved workers that the county authorities have communicated with the NEC magistrate and promised to pay the workers Tuesday.

“We have called David Logan and he told us that ‘they are working on your pay business’ and by Tuesday morning all of you should go to the office for your pay," Williams said.

He said the county authority regrets the delay of the payments to the NEC workers but will work with the NEC local office to remedy the situation.

Efforts applied to get word from the NEC Grand Bassa County magistrate David Logan was fruitfulness as reliable sources told FrontPage Africa that he had gone out of Buchanan city and his mobile phone was switched off.

The NEC local office in Buchanan, hired over 300 young people for the conduct the December 26 Presidential runoff election.

Due to the urgency of the runoff, the workers were constrained to abandon their Christmas celebration for deployment at various voting precincts in rural communities.