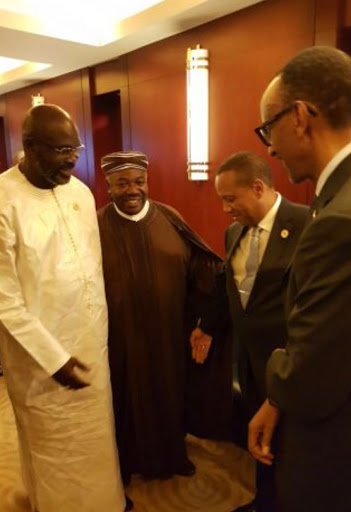 Africa leaders attending the 30th Ordinary Session of the General Assembly of the African Union in the Ethiopian capital Addis Ababa have given an arousing welcome to Liberian President, George Manneh Weah. The Summit, convened under the theme “Winning the Fight Against Corruption: A Sustainable Path to Africa’s Transformation”, is President Weah’s first international outing since his inauguration as Liberia’s 24th president.

According to a dispatch from Addis Ababa, the outgoing Chairperson of the Authority of Heads of State, Guinean President Alpha Conde, on behalf of all the African leaders welcomed President Weah and congratulated him on his election and promised AU’s support as he steers Liberia to development, lasting peace and prosperity.

Other Leaders including the newly inducted AU Chairman, Paul Kagame of Rwanda, Nana Akufo Addo of Ghana, and Macky Sall of Senegal also congratulated the new Liberian leader and pledged to work along with him.

President Weah praised the AU for its numerous support to Liberia over the years. He described the AU as “a unique African platform of solidarity which must be more effectively utilized to tackle the critical issues affecting the continent and its peoples”.

During the discussions, President Weah articulated Liberia’s positions on various issues including Peace and Security, the scourge of corruption and illicit migration. On Peace and Security, he urged for more resources to be targeted at the root causes of war and extremism on the continent which, include poverty, disease. The Liberian leader reiterated that corruption and the lack of adequate investment in youth programs are the key mitigating circumstances leading to illicit migration.

President Weah said “corruption is a plague that seems to manifest itself in all of our countries, and manifests itself in many forms throughout our body-politic. “I am convinced that the discussions which took place during this summit will strengthen our resolve and political will to tackle the challenge with all our resources and bring it under control,” he emphasized.

On the sidelines of the summit, President Weah held several bilateral meetings with UN Secretary General Antonio Guterres, Nigerian President Muhammadu Buhari, Ivorian President Ouattara, Nigerien President Issoufou, and a delegation from the European Union and he urged the consolidation of relationships for mutual benefits of all bilateral partners.

Due to his constitutional responsibility to address the legislature on Monday, January 29, 2018, President Weah excused himself before the completion of the deliberations and designated Foreign Minister Gbehzohngar Findley, Information Minister Eugene Nagbe and Ambassador George Patten to end the proceedings.

Other members of the President’s delegation included Finance Minister Samuel Tweah and Minister of State Without Portfolio-designate Trokon Kpui.