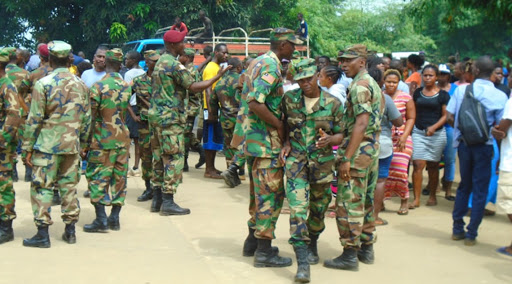 Wives of Armed Forces of Liberia officers on Tuesday blocked the highway leading to the Roberts International Airport in demand for money they claim the Ministry of Defense owes their husbands. Regular flow of traffic was obstructed for more than three hours.

“Our husbands can’t get pay on time, no money, no food, no current, no water, when we talked than they threatened us; so we just living like that in this barrack. We want the old people that leaving power to give us this money then the new President starts his own.”

“The General said they could not assure us that the money will be paid because it is not intended for sharing and that is why we are protesting,” said one of the protesters.

“It has been 11 years now since they started subtracting this money from their salary and told us that after series of engagement that if our husbands are not dead they will not give us the money,” added another protester only identified as Yassah.

“But what they are saying is that the deduction did not start 10 years ago and that it started in 2009, which we are saying is false.

“We appealed that we need our money so dearly because the living condition is so poor and our children go to school up to 9th grade but the money our husbands making cannot help us send them to college,” she said.

The women accused Brigade commander Colonel Augustine Foleh of firing several gunshots during their protest to scare them away expressing their grievances and said the AFL authority has threatened to witch-hunt their husbands if their protest.

“The Brigade Commander called to the gate and ordered his boys to seize the plank we can use to build our market kitchen and carrying home to build his house,” said Patience, one of the protesters.

They said their husbands were assured before signing up to the “compulsory saving” that they would receive it before the end of the government tenure.

“But the General is telling us that this compulsory saving is our husbands’ benefits – how possible can it be, because they are saying that if he (my husband) dies before they give me the benefit?” One of the ladies said.

They are also demanding that the outgoing government pay their husband’s benefits and improve the living condition in the barrack before turning over power to the next government on January 22.

According to them, the living conditions in the barrack are “discouraging, pitiful and dilapidated”.

“We need this government, by the special grace of God, to help improve the lives of soldiers and their families – we are dying slowly, we’re in complete darkness, dungeon.”

The protesters also claim the government is not providing electricity and water and does not pay their husbands’ salaries on time, stressing that school fees for elementary students at the barrack’s school is about LD$15,000.

When contacted for his reaction on the protest, the Chief of Staff of the AFL told reporters he could not speak on the matter, but promised to get back to the aggrieved women on Thursday this week.