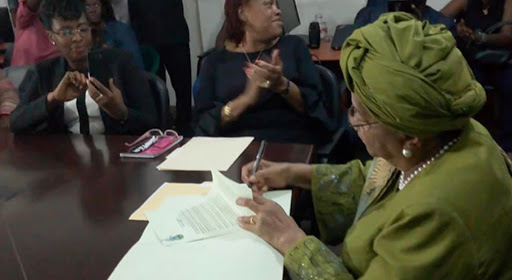 The most talked about Domestic Violence Bill, which has suffered so many setbacks from the 52nd and 53rd Legislatures, was finally given an Executive Order late Friday evening (January 19) by President Ellen Johnson Sirleaf.

The President’s constitutional mandate, arguably comes to an end by midday Monday, January 22, when President-elect George Manneh Weah would have been sworn in as Liberia’s 24th President for the next six years.

“Yes, it is true that President Sirleaf this evening gave an Executive Order on the original Domestic Violence Bill, which includes FGM [Female Genital Mutilation] that was removed from the draft bill before the 53rd Legislature.

The Executive Order is to last for a year, before anything else is done with the bill,” confirmed Presidential Press Secretary Jerolinmek M. Piah, when news began to filter in that the President had issued a last-minute Executive Order.

The Domestic Violence Bill, which contained various types of violence against women including the most talked about and controversial FGM, also known as female circumcision, was passed by the Lower House but when it reached the Upper House (Senate), they asked that the FG cutting component from the bill be removed, before it could be allowed to pass into law.

The lawmakers’ actions to remove the FGC aspect, was on grounds that Liberia should continue its culture and traditions.

However, some feminist groups argue that the actions of the lawmakers have some political implications. In that FGC has and is being used as a ‘trump card’ for lawmakers to get more votes from the rural parts of the country, with promises of protecting the traditional societies: Poro and Sande.

However, Mrs. Moore termed the President’s gesture to the women of Liberia as a “bitter-sweet gift.”

“We know it will later create a backlash. The women have a lot of work to do for the one-year period that the Executive Order is supposed to be active. Apart from the FGM, there is still a lot to be done on the DV Bill, including the age of consent.

I think this is a test for the incoming government. I believe that Vice President-elect Jewel Howard-Taylor will ensure that the CDC-led administration will see to it that the Bill is passed after the one year.”

It can be recalled that then Bong County Senator Jewel Howard Taylor pushed for both the Gender Parity and the DV Bills to be passed, but the Gender Parity Bill was rejected by both houses. However, the DV Bill suffered many setbacks, which included throwing it out of the debate floor.

“Thanks to that decision because it would have been thrown out of the window as it happened once in the 52nd Legislature, when Hon. Teah said, ‘Let this bill get off the floor and never finds its way back here.’

But due to the negative comments that came from the floor, the bill was withdrawn for us to go back and do our consultations. The Senate has put back that provision. But we still need to go back to the Lower House to have it passed,” said then Senator Howard-Taylor.

Regardless of her efforts and mobilization, the bill was barely passed last year by the House of Representatives, which demanded that the women remove the FGC component from the bill, on grounds that Liberia cannot depart from its heritage of culture and traditions.

“We recognize the fact that the outgoing President has power to issue an Executive Order on the Domestic Violence Bill, but as we celebrate the small victory, we want to recognize the silence survivors of FGM over the last 12 years and those, who did advocacy on FGM because just a stroke from the pen before today, could have helped many of not being circumcised,” said Feminist Korto Williams.

“I think this is a slow victory that the President could have done since 2009 during the resolution to end violence against women, when Liberia was asked to criminalize FGM, but not during the very last days of her presidency. Is it because she told the lawmakers to pass those late bills and they did not do it, so she is getting back at them by issuing an Executive Order thinking it will make us happy with her and angry with the lawmakers? It is also a risky situation for the CDC-led administration, because it is like she has now squeezed Vice President-elect Howard Taylor to the wall to go against her traditional people, which she won’t do,” said Mrs. Williams.

According to the UN Resolution 1325 on Ending Violence Against Women, it calls on member countries to ban FGM as violence against women.

“Welcoming the initiative taken by the Secretary-General on February 2, 2008, to launch a multi-year campaign to end violence against women, Recognizing that female genital mutilation violates, and impairs or nullifies the enjoyment of the human rights of women and girls, Recognizing also that female genital mutilation is an irreparable, irreversible abuse that affects one hundred to one hundred and forty million women and girls alive today, and that each year a further three million girls are at risk of undergoing the procedure, Reaffirming that harmful traditional or customary practices, including female genital mutilation, constitute a serious threat to the health of women and girls, including their psychological, sexual and reproductive health, which can increase their vulnerability to HIV and may have adverse obstetric and prenatal outcomes as well as fatal consequences, and that the abandonment of this harmful practice can be achieved only as a result of a comprehensive movement that involves all public and private stakeholders in society.”

“Recognizing that negative discriminatory stereotypical attitudes and behaviors have direct implications for the status and treatment of girls and that such negative stereotypes impede the implementation of legislative and normative frame works that guarantee gender equality and prohibit discrimination on the basis of sex, Welcoming the report of the Secretary-General on ending female genital mutilation, and the recommendations contained therein.”