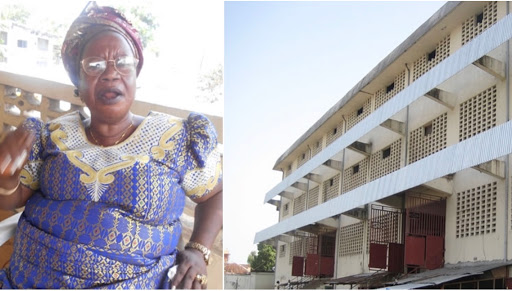 Former First Lady Nancy B. Doe has expressed her dissatisfaction over a branch of the Pan African bank— Ecobank— having an office space within the facilities of the market building.

According to Madam Doe in whose honor the Nancy B. Doe Market, located in Jorkpeh Town, 8th Street, along the Tubman Boulevard in Sinkor was named, the space the bank occupies in the building has compelled many of the ordinary market women to sell outside in the hot sun and the rains.

The former First Lady has meanwhile asked the incoming Vice President, Senator Jewel Howard-Taylor to intervene by making the bank to renegotiate its location from their facilities.

“The Nancy B. Doe Market building I built in the mid 1980 is for market women, but [President] Ellen [Johnson Sirleaf] took half of the building and gave it to Ecobank. For this reason, many of the market women are outside selling under the sun and rain. I am not happy,” she stressed.

Speaking to this newspaper in an exclusive interview at her 24th Street residence, Madam Doe accused the Liberian Leader of making the bank to take up the space in the building.

“That market building was not built for the bank but for market women, so why did Ellen give half of the space to the bank?

She does not have feeling for anybody; this is why she did it. I am totally against the idea of the bank being in the market, but I do not have voice, especially Ellen will not listen to me,” she said sadly.

Pressed further to state concrete reason why the President won’t listen to her, she refused to elaborate further. However, she stated: “Let’s leave that other one alone. It can be another story for another day.”

It was during Mrs. Doe’s husband’s administration in 1980s, the late former President, Samuel K. Doe, that President Sirleaf was incarcerated at the famous Post Stockade.

The President is on record of saying that she was raped during her imprisonment at this prison facility, which was once located within the military barracks — Barclay Training Center (BTC) on United Nations Drive in Monrovia.

Former First Lady Doe reiterated her call to Vice President-elect Howard-Taylor to remove the bank from the market, so that the women can have the space to sell; adding: “not everyone is educated to work in the office.”

“Jewel is someone who can listen to people’s voice; but not Ellen who does not have time for anybody other than her own family.”

“I also want our newly elected VP to visit all the market women at various market sites to find out what they need in order to develop their capacities and the market buildings,” said Madam Doe.

Madam Doe said she likes Veep-elect Howard-Taylor because she has a compassionate heart for her fellow citizens and she knows how to deal with the old people like herself.

“I want to beg Madam Taylor upon taking office, to please move our young girls doing prostitution from the streets."

"Some of them live in the graveyard and I feel sorry but I do not have the hand to do anything for them. But I believe my daughter Jewel will feel sorry for them because she has feeling for humans, especially the women.”