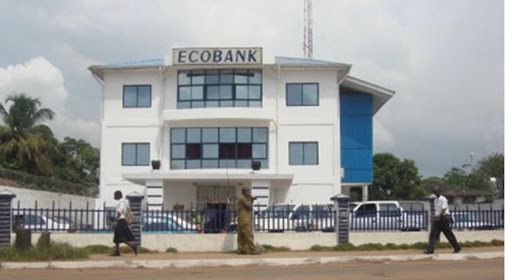 Ecobank Liberia’s Limited has clarified that it no longer occupies and operates from the space that was given to it in the Nancy B. Doe Jorkpen Town Market as claimed by former First Lady Nancy B. Doe.

“We left the building since 2016; so we were very surprised to see that Former First Lady Nancy B. Doe’s claims that we were still occupying the space. Everybody who read the publication has been asking what’s going on.”

“So you were not fair to us, by not asking our side before publication. In fact, the small space we once occupied, was not even big enough to cut a partition, but after we left and some renovation was done, the space was increased and partition cut by those occupying it,” said the bank’s head of Marketing and Communications, Mrs. Ivy Fairley Fahnbulleh.

An Ecobank dated February 25, 2016, and in the possession of this newspaper, to Liberia Marketing Association, stated that the bank had turned all keys over to LMA and was no longer occupying said space in the building.

When FrontpageAfrica checked the space once occupied by Ecobank, it is now separated from the rest of the market building and has a locked steel door.

There was no sign to show ownership to any entity or that an institution had occupied it.

However, there were African clothes designs placards on the walls and nothing related to Ecobank was seen there. When FPA asked a lady, who was sweeping the place, she said a women’s group, whose name she could not remember, was now occupying the space and that the head of the group had traveled out of the country.