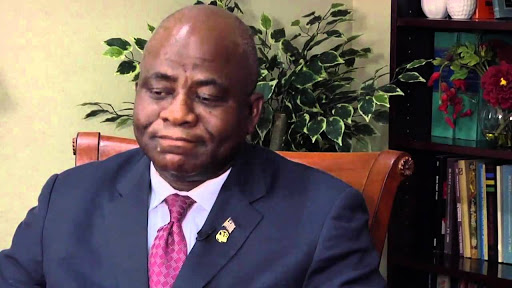 The Minister of National Defense, Brownie J. Samukai admitted to wastefully spending the “welfare and supplementary pension benefit” belonging to members of the Armed forces of Liberia (AFL).

Speaking to a team of journalists at a press conference on Thursday, January 18 at the Ministry of National Defense (MOD) in Monrovia, the long serving Defense Minister in the Ellen Johnson Sirleaf’s administration said the salary deduction scheme begun in 2009 as a supplementary pension benefit for AFL soldiers after their years of service.

By October 2017, the amount deducted from the officers amounted to a little over USD$2 million and was deposited into the AFL account at Ecobank, Minister Samuka said.

Samukai admitted that the MoD is responsible for the “procedural lapses in the management, expenditure and the utilization of the funds”.

Stating seven counts to elaborate the ministry’s lapses in managing the “contributory savings” fund, he outlined that the ministry did establish guidelines, did not provide timely information to personal about the fund, did not consult authorities of the military high command, and ignored procedurals of normal budget appropriation for soldiers’ welfare.

“The Ministry of National defense authorized the expenditure of funds from this account on the soldiers’ welfare without the requisite consent of the AFL high command; and that all monies spent on military personnel welfare should not have been handled by and through the government normal budgetary appropriation and not from the AFL account,” he said.

Minister Samukai’s revelation about the usage of the savings comes after more than a week of agitation from aggrieved wives of AFL soldiers.

The women have staged protests demanding their husbands’ savings as the transitional process to the incoming administration draws to an end.

They blocked the highway leading to the Roberts International Airport in Margibi County, which stalled normal flow of traffic and attracted huge attention from the local media.

“We need this money so dearly, to our dire need because we have poor electricity in this fence (barrack), the living condition is very deplorable and our children have to go out to another school after junior high,” said the leader of the aggrieved wives, who refused to mention her name for fear of reprisal.

Minister Samukai said the government has reached a decision to restitute or refund the money taken from the account of the AFL by allocating it in the next budgetary appropriation.

He said there would be recommendation ensuring that the AFL manages its own account without hindrance or interference from authorities of the MoD.

“The government of Liberia has determined that it is appropriate and the right thing to do is to restitute or refund the full amount of USD$1,147,656.35 that was expended on the AFL for the past several years.

“This refund shall be immediately provided in the next budgetary appropriation to the AFL by the government of Liberia.”

Minister Samukai: “The AFL shall manage all of its accounts itself, including welfare account, through their chain of command without any hindrance nor interference from authorities of the Ministry of national Defense.”

The minister disclosed that there would be no withdrawal from the account of the AFL unless a concise policy is put in place to authorize the usage and expenditure of monies from the AFL welfare account.

“The shall be no further withdrawal from this account until such time when a clear and concise policy is put in place that will articulate the management, procedure, criteria and authorization for the usage and expenditure of monies from the AFL and welfare account,” he said.

The statement also mentioned that there shall be no further deduction from the morale and welfare account and the MoD shall not utilize funds appropriated of belonging to the AFL for any purpose.”