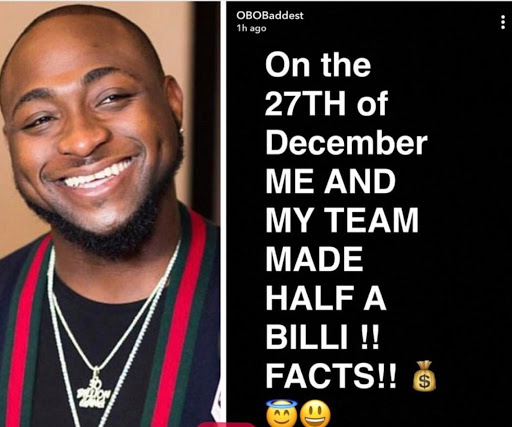 2018 is already looking up for Nigerian hot maker, Davido. The ‘FIA’ singer took to Snapchat to share some very exciting news with his fans. Apparently, the numbers from the singer’s 30 Billion concert are in and he says he and the OBO team made a whopping half a billion naira from the showcase.

Although the musician did not release an official breakdown of the concert revenue stream or let us know how he got his figures, we do not find the statistics hard to believe. The concert which held at Eko Hotel on December 27 was already sold out days before the event with over 10 thousand people in attendance. Apart from proceeds from ticket sales, some major brands including Pepsi were also on board as sponsors for the show.

The concert featured an all-star line up with performances from his ‘new best friend’ Wizkid, 2Face, Mayorkun, Niniola, Olamide and a lot of other A-list Nigerian artistes. Apart from the scheduled performances, Davido made the crowd go wild when he invited iconic Nigerian defunct label, MoHits, for a surprise reunion performance which was the biggest highlight of the night.

The unexpected performance threw the crowd into a frenzy as they performed their hit singles: ‘Booty Call’, ‘Close To You’, ‘Pere’ as well as other iconic Mavin anthems. D’Banj, Don Jazzy, D’Prince, Dr. Sid, Wande Coal and Ikechukwu had fans clamoring for a reunion of the label.

As if the MoHits reunion wasn’t head busting enough, the hashtag, ‘#30Billionconcert’ also trended in two major countries; The United States and The United Kingdom.