All Black One Red:  Blanca Blanco Responds to Criticism for Wearing Red to Golden Globes - 'The Issue Is Bigger Than My Dress Color' 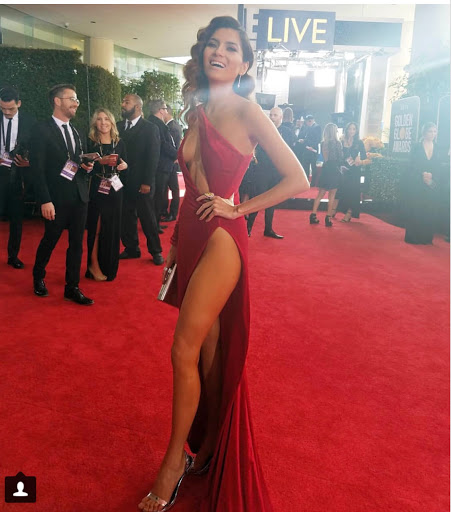 On Sunday evening, celebrities — including presenters and nominees — wore all-black dresses and outfits at the 2018 Golden Globes as a symbol of protest against harassment in Hollywood. “This is a moment of solidarity, not a fashion moment,” said Eva Longoria, adding, “For years, we’ve sold these awards shows as women, with our gowns and colors and our beautiful faces and our glamour. This time the industry can’t expect us to go up and twirl around. That’s not what this moment is about.”

While most stars dressed in black, some celebrities at the event decided to not take part in the initiative, including Latin actress Blanca Blanco, opting for a crimson red evening gown.

After walking the red carpet, critics condemned Blanco for stepping outside the dress code. “What on earth was #blancablanco thinking wearing that dress to the #GoldenGlobes ????? #TimesUp,” wrote one person on Twitter, while another wrote, “I don’t get why you would want to not wear black? In a demonstration that’s about the abuse, inequality, and objectification of woman this seems like an awkward choice of outfit. Beautiful! But not the time or place perhaps?”

However, some defended the actress’s fashion choice on social media calling out those shaming her. 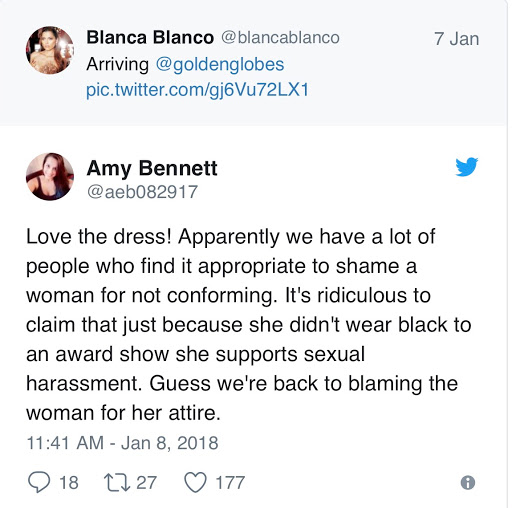 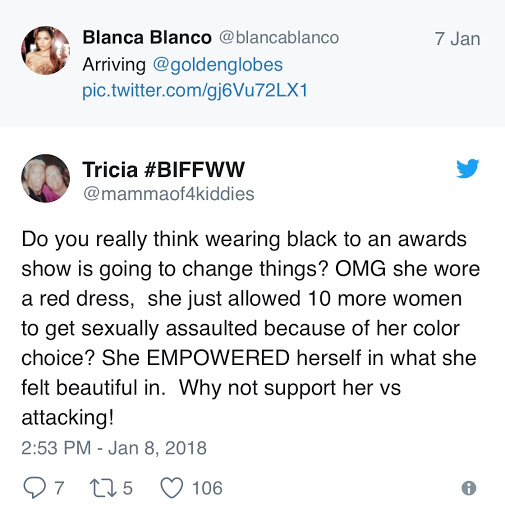 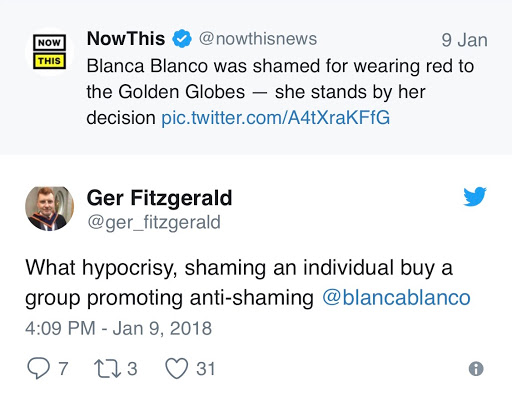 Blanco stands by her choice and expressed her disappointment in the backlash she has received.

“I love red,” she told PEOPLE. “Wearing red does not mean I am against the movement. I applaud and stand by the courageous actresses that continue to break the cycle of abuse through their actions and fashion style choices. It is one of many factors leading women to a safer place because of their status. I am excited about the #TimesUp movement; true change is long overdue.”

She added, “Shaming is part of the problem.”

The California-born actress, 36, wasn’t the only one to ditch the black for the show. Hollywood Foreign Press president Meher Tatna also wore red, while German model and actress Barbara Meier went a more colorful look on principle, writing, “If we want this to be the Golden Globes of the strong women who stand up for their rights, I think, it’s the wrong way not to wear any sexy clothes anymore or let people take away our joy of showing our personality through fashion.”