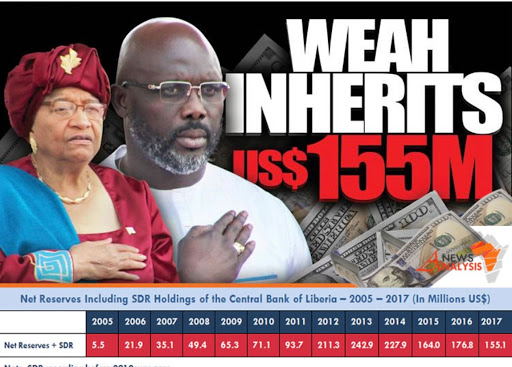 According to the Central Bank of Liberia, the current foreign reserve Weah’s administration has inherited is US$155.1 million. And with the prevailing economic situation, generating more revenue would be a daunting task that would require massive stimulus plan.

The President is not ignorant of what he has signed up to. In his maiden Annual Message at Legislature on Monday, 29 January 2018, right in the presence of former President Ellen Johnson Sirleaf, Weah said the obvious:

“…It is possible to inform you that the state of the economy that my administration has inherited leaves a lot to be desired."

"This is plain for all to see, for we are all affected by it. Our economy is broken, our government is broke, our currency is in free-fall, inflation is rising, unemployment is at an unprecedented high, and our foreign reserves are at an all-time low.”

According to the Central Bank of Liberia (CBL), the country, in 2017, experienced sharp increase in inflation from 8.8 percent in 2016 to 12.4 percent.

However, the country experienced some growth in the GDP last year. There was an increase of 2.5 percent, bringing the GDP up to US$904.3 million. T

he improvement in the GDP, according to the CBL can be attributed in the increase in the mining of gold in the country.

But the President isn’t confident of the figures and did say he would not vouch for them in the absence of the complete audit.

Finance Ministry sources informed FrontPageAfrica that the Liberia Revenue Authority may likely not be able to raise up to US$60 million of the FY2017/18 National Budget due to several variables ranging from issues with imports, slump in prices of major exports to refusal of real estate owners to pay their taxes.

Johnson Williams, Assistant Director for Budget Development at the MFDP, told FPA on Tuesday that once major companies in the country are struggling to sell their raw material on the world market due to slump in price or drop in demands, the country’s revenue base would be severely impacted.

“When price of rubber and iron ore drops obviously these companies would not be able to remit to government the expected revenue on their export,” he said.

Economists say Mr. Weah must institute policies that would smoothen the ground for a favorable start.

President Weah in his Annual Message fell short of giving a clear cut formula to be adopted by his government to resuscitate the economy, however, he mentioned that his administration would introduce new legislation and policies which will be intended to achieve sustainable economic growth, develop and expand agriculture, and address our very large infrastructure deficit, with particular emphasis on road construction and the provision of affordable and adequate electricity for all our people.

In the face of very high expectations of the new regime, Liberians have to brace for a continuity of the status quo for an indefinite period of time as the new finance minister has said there’s “no quick fix” to the country’s economic crisis.

During his confirmation hearing, new Finance Minister Samuel Tweh, said the rush to de-dollarize the Liberian economy caused increase in the exchange rate between the US and the Liberian dollars.

He said, “Reversal of some de-dollarization policy ongoing now would help the real sustainable solution."

"There is no quick short-term fix," Tweh said.

"The economy has to generate foreign exchange so we have to domesticate sources of production in Liberia and increase our import base on food especially rice.”

The Finance and Development Planning Minister believes the first impact of the de-dollarize policy is the reduction in the US dollars earning potential in the economic.

According to him, the Central Bank has only been able to buy US$3.6 million annually in the last six years far short of the US$86 million that was annually bought.

This he said is a significant shortfall in foreign exchange, which puts pressure on the Liberian dollars.

“Anything we do in the short term will be to ensure that it be at an equilibrium that is manageable."

"Unless there are investment policies to ensure that Liberian businesses get into manufacturing and the private sector is fully capitalizing to leverage the gains we will not be able to solve that problem over time and if we attempt to just change it over time by saying let’s use Liberian dollars, it is going to get worse.”

Like President Weah stated in his Annual Message, former Minister of Finance and now Director of the Graduate Program in Business & Administration at the University of Liberia, Prof. David M. Farhat, told FrontPageAfrica in an interview that the new regime wouldn’t need cash to make the economy viable but by instituting the right policies that would help set the stage.

According to Farhat, President Weah’s administration would have to make some policy decisions, which would not require money.

“Nation is driven by money and driven by policy…” he said.

Prof. Farhat further advised that there’s need for the Weah-led government to, after forming good policies, build relationship with development partners to see how well they will help the country upon deciding on some of the things that require money that Liberia will be opting for.

“The government needs to consider that its wage bill has been too large so it has to be reduced until the economy improves,” he said.

Inheriting the lowest foreign reserve in five years signals a rocky start for the new administration as the prices of the country’s main exports remains low on the world market.