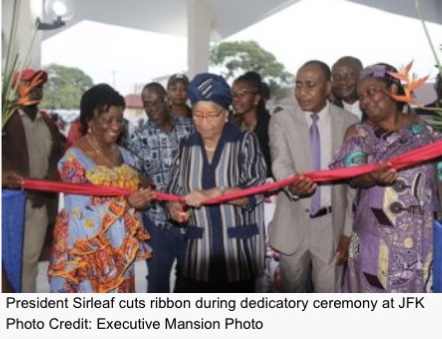 President Ellen Johnson Sirleaf has commended doctors, nurses including the management and staff of the John F. Kennedy Medical Center for demonstrating commitment, hard work and confidence in serving the country. She referred to the doctors, nurses and the management as ‘Awesome Heroes’ who have worked to restore the JFK: adding, "All of you who have worked so hard, You have restored JFK to what it is right now; We say thank you; You are indeed the ‘Awesome heroes," President Sirleaf noted.

According to an Executive Mansion release, President Sirleaf made the commendation on Saturday, January 13, 2018 on the compound of the John F. Kennedy Medical Center when she joined JFK management and staff including doctors and nurses to celebrate JFK @ 50 - the Rebirth. The Administration Building, Maternity Hospital, Eye Center, Fountain and Main Entrance were restored.

The Liberian leader used the occasion to pay tribute to late John F. Kennedy, former American President in whose honor the hospital was named noting: "JFK is a historical monument dedicated to a man of historical significance," she added.

President Sirleaf emphasized that JFK must remain a Liberian hospital that has demonstrated confidence and appreciable services. She praised Dr. Wannie-Mae Scott-McDonald, CEO of JFK and partners who have contributed sacrificially and reinvested in the institution despite the challenges that existed and continue to exist.

For her part, Dr. Wannie S. McDonald thanked President Sirleaf for affording her the opportunity to serve her country and support received thus far from the government.

She said upon assuming the helm of leadership at JFK, she and her team began the process of restoring and expanding basic services, introducing new business models that would help to generate revenue that could be of help to the institution; which she said experienced some challenges. Mrs. McDonald emphasized that the level of achievement is a commitment of a team.

Speaking further she said:"Today marks one of our greatest achievements and we are both excited and honored to have our many partners, friends and distinguished guests here to celebrate with us." she noted. “Despite the many challenges, the JFK remains committed to providing the public with the best of care in Liberia - stressing that the institution's goal is to regain brilliant performance in the region,” she underscored.

She said the rebuilding of JFK started in 2006 but was suspended 2014 due to the outbreak of the deadly Ebola disease and others interferences.

Meanwhile, President Sirleaf has officially handed over the Gbah Market and launched the Revised National Gender Policy 2018-2022 in Gbah Market, Bomi County commending partners for their commitment and continued support to Liberia's development initiatives adding, "Let me say how pleased I am to be here with you to commend you for demonstrating commitment and support," she said.

She used the occasion to congratulate the market women of Gbah to use the facility for the purpose intended. She recalled efforts by her administration working with partners to lift women and give them opportunity to improve their lives.

The Liberian leader assured the market women of her continued commitment to improving their conditions.

In separate remarks, the General Superintendent of Liberia Marking Association, Mrs. Alice Yeabah, UN women, ECOWAS women, NG women Secretariat and the Swedish Ambassador to Liberia thanked President Sirleaf for affording the women the opportunity to leave the streets and do business responsibly.