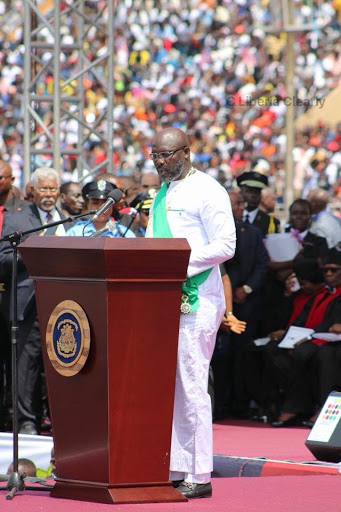 Former football star George Weah promised to tackle Liberia’s economic and social problems as he was sworn in on Monday in the first democratic transfer of power for more than 70 years.

Here are five things he has pledged to do since his election:

Failing to tackle endemic corruption among public officials was a key criticism of the outgoing administration of President Ellen Johnson Sirleaf.

Weah said in his inaugural speech that voters had specifically tasked him with rooting out graft.

“I believe the overwhelming mandate that I received from the Liberian people is a mandate to end corruption in public service. I promise to deliver on this mandate,” he said.

“As officials of government it is time to put the interests of our people above our own selfish interest. It is time to be honest with our people. Though corruption is a habit among our people, we must end it.”

Weah said he would remove “unnecessary restraints” on business in a country that ranks near bottom as a place of doing business rankings despite abundant natural resources.

“To the private sector, I say to you, Liberia is open for business,” he said in his address.

“We will do all that is within our power to provide an environment that will be conducive for the conduct of honest and transparent business.”

However, he said he no longer wanted Liberians to be “spectators” in their economy, as Indian and Lebanese immigrants dominate retail and services while Western and Asian firms own the vast majority of rubber, palm oil and iron ore operations.

Many Liberians missed out on a formal education during the 1989-2003 civil war, and lack the literacy or skills to get jobs outside the informal sector.

Weah said in a speech last week he believed vocational training was the answer to helping this lost generation.

We need more and better-trained teachers not only for our vocational institutions but equally so for our schools and universities,” said.

“Vocational institutions are the best way forward to enable young adults to enter the job market sooner, as most of them have already assumed family responsibilities.”

A bigger funding commitment to schools and training “will be submitted to the National Legislature later this year,” he promised.

The opaque nature of political deal making, especially over the use of public land, has led to frequent disputes between the local population and private companies in Liberia.

Weah said freedom of speech had strengthened under Sirleaf and promised a more “co-operative” government that was more direct with voters.

“Together we owe our citizens clarity on fundamental issues such as the land beneath their feet, freedom of speech and how national resources and responsibilities are going to be shared,” he said after being sworn in.

– Respect for rights and democracy –

Weah paid tribute to the hundreds of thousands of people who died during back-to-back civil wars and said the “immeasurable cost of the lesson” was the value of equality and freedom.

“These are the fundamental human rights that our people deserve, and that must be held up and measured against our actions, policies and laws,” he said.

He also urged the population to look beyond tribal and regional affiliation and to consider themselves “Liberians first”.