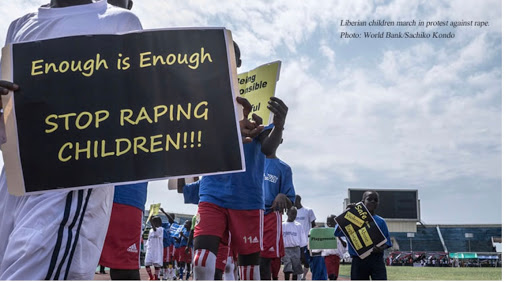 A nine-year-old girl has been allegedly raped by a 59-year-old man in West Point, Monrovia’s biggest slum community.

The girl struggled to tell her mother after four times being abused by the suspect until after several attempts by family and neighbors she unveiled the name of the perpetrator.

Fayiah Cole, the suspect, is currently behind bars at the West Point Police depot after the complaint was filed to the Women and Children Protection Section (WACPS) of the Liberia National Police.

But some so-called elders of the community identified as Richard Edwin and Pa Weah have been negotiating with the police for the release of the alleged rapist.

They reportedly demanded the release of the survivor who is being held at a safe home.

According to the mother of the survivor, the two elders approached her with a plea to withdraw the case from the police and that the suspect was going to handle the medical responsibility.

She said the two old men in their advocacy for the release of the suspected rapist said he has been a member of the community for the past 20 years and they’ve known him as a peaceful man.

The mother said her daughter told her she was experiencing chest pain.

“So I told her I will carry her to the hospital after the Christmas, her skin was never hot but she was pale like she had jaundice.”

“So I decided to take her to the hospital and the nurses told me she was tampered with; when we came home, we persuaded her to tell us who had vaginal sex with her until she called the perpetrator’s name.”

“She said it started when I left her in the bathroom to bath by herself; but to be frank, I didn’t see her changing under wears till her sister told me that her under wears seat had stains, so I thought it was infection because we all suffer from the same infection."

"I noticed that there was no more underwear for her, so I started asking.

“She told me that she had to throw away the under wears because it was filled with blood because every time she goes to the bathroom the man can come to have vaginal sex with her and she was afraid to tell me because the man threatened to kill her.”

The mother narrated that she along with five persons house-arrested the perpetrator at 1:00AM on Friday morning.

“There were five persons in my room where he confessed saying that we should settle it because he has stayed longer in the community.

”According to her, the 59-year-old confessed to sexually abusing the minor on Christmas and New Year days.

She told this paper, her family and the suspected rapist share the same bathroom – an opportunity he seized to abuse the minor.

It can be recalled, UNMIL and partners held a National Consultation on Sexual and Gender Based Violence and Peace-Building where over 200 traditional chiefs and elders, including women groups and women in leadership, crafted a resolution to be presented to President Ellen Johnson Sirleaf, in which they agreed that the government amend the law on rape to allow for castration of convicts.

They lamented that a harsher punishment must be put in place for would be rapists to deter people from carrying out the act victimizing women, especially young girls.

The traditional chiefs also recommended a five-year jail sentence for anyone who compromises rape case.

The chiefs at the conference also agreed that regular meetings be convened to discuss societal issues to avert these unwarranted acts that pose threats to the well-being of citizens.

The forum was sponsored by The Carter Center in partnership with the United Nations Mission in Liberia (UNMIL).