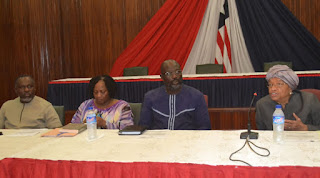 President Ellen Johnson Sirleaf and President-elect Senator George Weah co-chaired the first meeting of the Joint Presidential Transition Team (JPTT) on December 31, 2017 in the Cecil Dennis Auditorium at the Ministry of Foreign Affairs.

The team, the first of its kind over 70 years, will organize the smooth transfer of power on January 22, 2018 which will be the third working Monday of month. Vice-President-elect Senator Jewel Howard-Taylor also took part in the meeting.

Welcoming President-elect Weah and his delegation, the President thanked the CDC leader for responding to her invitation.

The President said this was something new and therefore will take some serious level of coordination between the two teams, each of which comprised 15 persons.
President-elect Weah thanked President Sirleaf for setting up the mechanism that would allow for a smooth transition process and said that he and his team will fully cooperate to ensure full success.
Issues discussed today included Executive Order 91 which created the transition team, setting up of a transition secretariat and formulation of a work plan for the team.